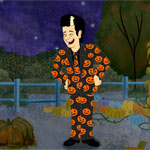 Just ahead of its TV debut this weekend, SNL has released a teaser for the seasonal skit-inspired The David S. Pumpkins Halloween Special, which appropriately raises more questions than it answers. Featuring the voice of “Haunted Elevator” guest star Tom Hanks reprising Pumpkins, the special premieres on NBC this Saturday at 11:30 p.m ET/PT.

In the teaser, in what seems like a nod to another well-known animated Halloween special, a boy and his little sister are surprised to see the haunted elevator rise up out of the ground in the middle of the pumpkin patch — and even more surprised when David Pumpkins steps out to tell them that they have been granted his services for Halloween because they picked the “magic” pumpkin.