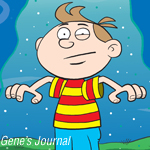 Skywriter Media and Entertainment Group and Roddenberry Entertainment are developing an animated children’s comedy series called Gene’s Journal, based on the web comic created by Trevor Roth and illustrated by cartoonist David Reddick.

“We are beaming with excitement at the opportunity to bring television audiences a glimpse into the life and experiences that shaped a young Gene Roddenberry into one of the greatest and most imaginative storytelling minds of the 20th century. Roddenberry’s successful web comic offers a wonderful foundation for this fantastic journey and we look forward to expanding on it in an animated series worthy of the Roddenberry tradition,” said Skywriter CEO Kevin Gillis.

“It’s fun to play with the what-could-have-been part of my father’s life,” said Rod Roddenberry, son of Gene Roddenberry and the principal at Roddenberry Entertainment. “Gene’s Journal is a concept full of imagination and possibility. I’ve always thought about what the idea could become when it’s able to really spread its wings in a new medium. I couldn’t be more thrilled than to see it making that evolutionary step, and I can’t think of any better place to announce it than here at Comic Con.”