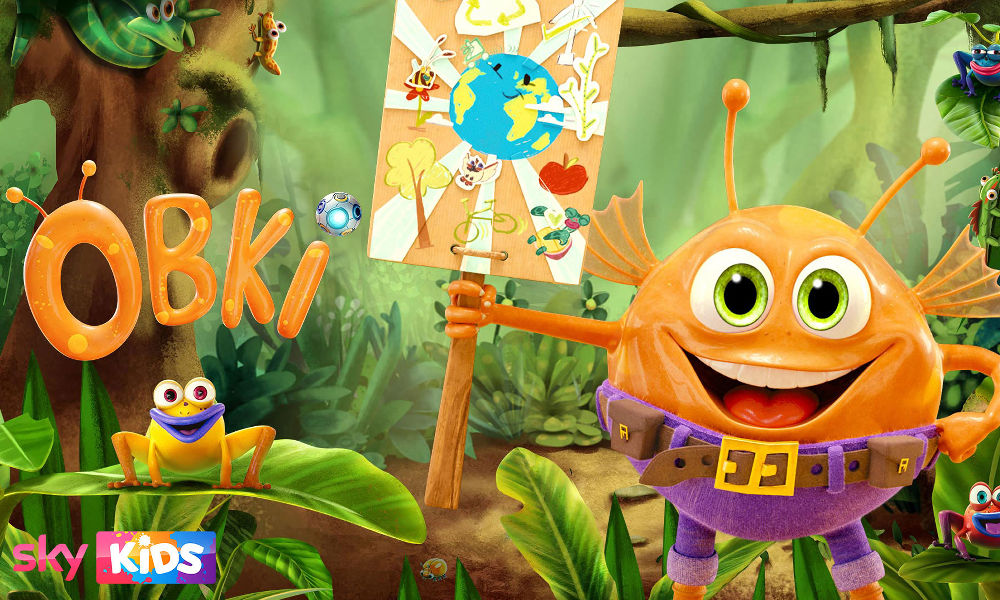 Sky Kids has announced a brand new Sky Original animated TV series, Obki. Aimed at helping children understand climate change, the show follows a lovable alien named Obki on his journey to be a positive force for good on Earth. The series is available now on Sky Kids on demand for customers across the U.K. and R.O.I. Obki was produced by London-based studio Ritzy Animation.

Airing ahead of COP26, the U.N. Climate Change Conference later this year, the show will explore issues around climate change in an informative and entertaining way for five- to nine-year-old children through Obki’s adventures with his friend, the Orb. This new series is a collaboration with Sky Zero – Sky’s campaign to be net zero carbon by 2030 and commitment to encourage its customers to #GoZero, by using its content and channels to raise awareness of the climate crisis and inspire viewers with actions they can take to protect the planet.

“We’re delighted to work with Obki Productions to bring this critical message to children. The next generation will inherit the world we leave behind – together we can educate and empower them to make positive choices that help to protect the future of our planet,” said Lucy Murphy, Director of Kids Content, Sky.

Fiona Ball, Director – Bigger Picture, Sky, added, “At Sky we believe in better which is why we have committed to being net zero carbon by 2030 and to use our platforms to inspire meaningful change. Obki will positively engage and influence children’s behavior and increase their understanding of what they can do to help tackle the climate crisis.”

Through Sky Zero, Sky is on a mission to deliver meaningful and actionable change to help preserve our world. As one of Europe’s leading broadcasters, Sky believes it has a responsibility to use its reach and voice to help drive important behavioral changes when it comes to the environment. Through the power of its platforms, television content and products, Sky is helping its millions of customers better understand and reduce their carbon footprint.

“We are thrilled to be producing our first-ever kids TV series on such an important subject and proud to be working with Sky which has been such an enthusiastic and collaborative partner,” said Amanda Evans, Founder, Obki Productions.

Since 2019, all Sky Originals in the U.K. have been CarbonNeutral certified, and earlier this year Sky published its new Sustainable Production Principles; clear, industry-leading guidelines that will help all its future productions across original drama, comedy and more achieve albert sustainable production certification.

Sky has also introduced a new Planet Test to make sure all its production, editorial and commissioning teams across Sky and Sky Studios actively consider the environment and champion sustainability on screen and off. This focuses on three areas: raising the issues, showing action and using content to raise awareness.

As well as these commitments, building work is well underway for the new Sky Studios Elstree which aims to be the world’s most sustainable film and TV production studios when it opens next year.

Season 2 of ‘Star Wars: The Bad Batch’ Announced
Acamar Brings Bing Back to the Big Screen with ‘Animal Stories’