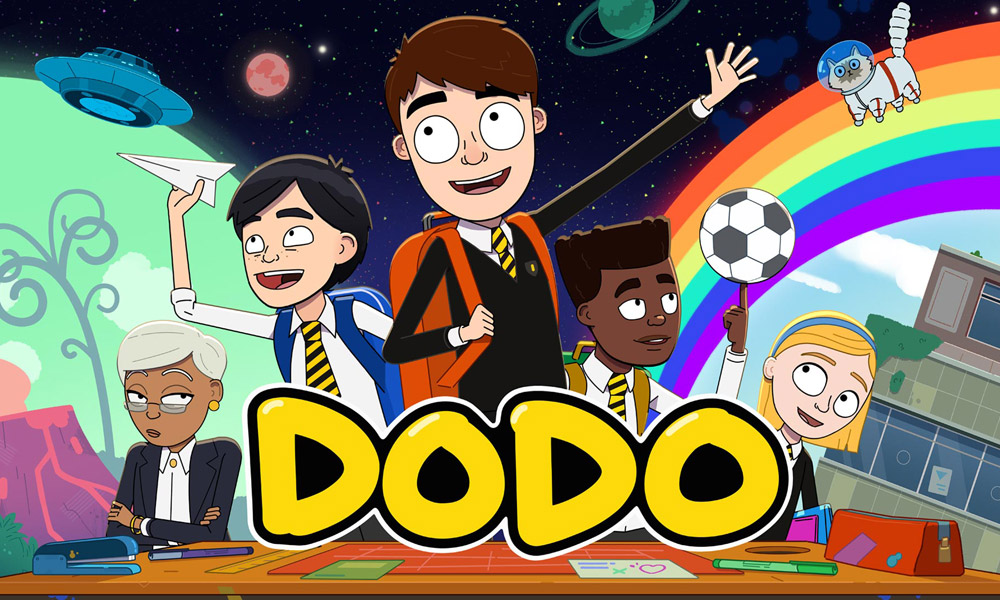 A new animated school-based original comedy series, Dodo, narrated by singer-songwriter Ricky Wilson and starring Dylan Llewellyn (Derry Girls) as the voice of the lead character, is set to air on Sky Kids next month (June 14). The 20-episode British comedy animation, produced by BAFTA-winning Wildseed Studios, is a funny, relatable and heart-warming portrayal of everyday school life in the U.K. as experienced by 11-year-old Joe Connolly.

“Joe’s dramas at secondary school will feel familiar to anyone who has ever experienced the highs, lows and anxieties of the first year in ‘big school’. Yet, with his incredible animated fantasies and disaster scenarios, they’re also uniquely funny and surprising. We know our audience will love this show,” said Estelle Hughes, Commissioning Editor for Sky Kids.

Narrated by Kaiser Chiefs frontman, The Voice U.K. judge and former art teacher Wilson, the series follows Joe (Llewellyn) as he navigates the dramas and pitfalls of his first year at secondary school. With new situations and embarrassments around every corner, small events mean big drama for Joe, as he tries to fit in, make new friends, girlfriends and even loses his school trousers. But Joe has best friends Frisbo, Pete and Lily at his side, helping him realize that each challenge is really not the end of the world as he triumphs over adversity and survives another school day.

The series is based on multi-award-winning film and YouTube hit Not the End of the World, by British creator and series director Jack Bennett, which he made while still in his final year at university where he was discovered by Wildseed. In keeping with their mission to unearth new talent, Dodo is Bennett’s first series for television but, according to Wildseed’s creative director Jesse Cleverly, “I’m sure it will be the first of many.”

Wildseed Managing Director Miles Bullough added, “Dodo presents a funny, humane and above all compassionate picture of what it is like to be 11 years old, discovering how bewildering the world can be. As a result, this warm-hearted and life-affirming show will resonate with anyone – whether still at school or looking back on their own school days – who has experienced the intensity of this stage of life.”

Dodo is produced by Helen Stern (The Amazing World of Gumball) with the support of Ben Ward (Horrible Histories) on scripting and with executive guidance provided by Wildseed’s Head of Kids and Animation Sarah Mattingley. The series was commissioned by Lucy Murphy, Director of Kids Content at Sky U.K. & Ireland, and Exec Produced for Sky by Estelle Hughes, Commissioning Editor, Sky Kids.