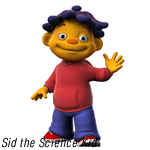 Four new episodes of Sid the Science Kid are arriving in mid-April to celebrate Earth Day.

The new episodes of the  series, which is produced by The Jim Henson Co. and KCET/Los Angeles and airs on PBS Kids!, will each cover a different science theme.

Henson describes the episodes as follows:

Additionally, the show’s website (pbskids.org/sid) will be revised to feature an all-new home page that is revised weekly. There also are resources including blogs for parents and teachers at pbsparents.org and pbsteachers.org.