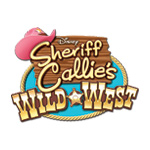 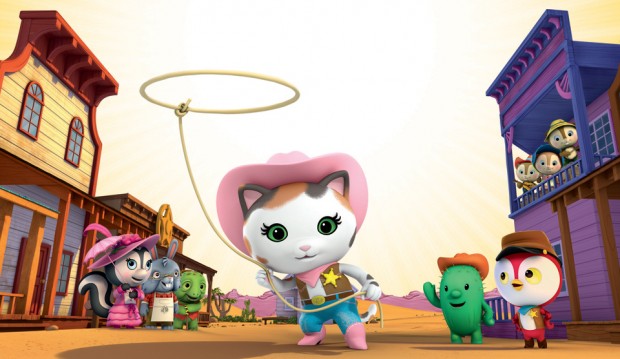 A kid’s never too young to learn about the “Cowpoke Code!” At least, that’s what the creators of Disney Junior’s charming new series Sheriff Callie’s Wild West were thinking when they decided to develop a show about a cat sheriff, her woodpecker deputy and their fun cactus sidekick. Callie and Peck and the rest of the residents of Nice and Friendly Corners are going to teach two- to seven-year olds all about morals, manners and social ethics when the toon debuts on Disney’s WATCH app this month and on the cabler in early 2014.

Sheriff Callie’s Wild West was created by Denis Morella and George Evelyn and developed by Holly Huckins, the same team who gave us Higglytown Heroes, another preschool show that ran on Disney Channel from 2004 to 2008. Morella recalls pitching an early version of the show to Disney Junior’s exec VP and general manager Nancy Kanter. “We had this little Western sheriff and all these characters from a Western town, and, they liked it,” he says. “We made the pilot and then decided to add more humor and age it up a little bit. Disney is beat at having strong, character-driven stories, and our Western comedy felt quite at home.”

Of course, the creators of the toon are very careful about creating a Western show that avoids the trappings of a grown-up world like Deadwood or the Wild, Wild West! “Our sheriff has a magic noodle lasso–which she doesn’t use as a weapon, but as a rope to help the townspeople,” says Huckins, who also exec produces the show. “We have a saloon that serves milk and fruit drinks, right on Main Street. We also have original songs with a dance number in each 11-minute episode. There’s a Prairie Dog Trio, which serves as a Greek chorus that helps the stories along.”

Inspired by classic Hanna-Barbera toons like Quick-Draw McGraw and colorful cinematic Westerns like the 1965 Jane Fonda-starrer Cat Ballou, the show creators strove to craft a unique world that was both inviting and memorable.

“We have big landscapes of the Southwest desert as our show’s environment,” says Morella. “It was wonderful to create these backdrops, with big, blue skies, golden yellow plains. We really wanted to show off this world in CG.”

Huckins, who oversees the writing and acting aspects of the show, says in the beginning, she was a bit nervous about going the CG route. “I was thinking that 2D animated comedies are more common. CG is going to be a lot more work, but ultimately, we were really glad to go with 3D. It’s both hilarious and exciting to see this Western come to CG life.”

“Getting the CG characters to work is always a challenge,” explains Morella. “For example, Callie has these big eyes, big head and a big cowboy hat. It all works great as still imagery, but it’s much harder to make it work in CG. You need a lot more light. Some of the early designs weren’t quite right for CG, so the characters certainly evolved visually in the process.”

Both exec producers believe that both the look of the show and the writing has improved a lot throughout the long development process.

“Throughout the episodes, we get to really know the residents of this Western town,” explains Morella. “They’ve become funnier. Then we have all the incidental characters in the background that we get to make stories about. You can even imagine spin-offs based on the side characters!”

“I think that’s why we loved some of the old TV shows…Just like The Andy Griffith Show, the sheriff is the voice of reason and you have a hilarious deputy and all the nutty people in this town. Those really sweet, old, classic comedies really inspired us along the way.” — Exec producer and co-creator Denis Morella

“I think that’s why we loved some of the old TV shows,” adds Morella “Just like The Andy Griffith Show, the sheriff is the voice of reason and you have a hilarious deputy and all the nutty people in this town. Those really sweet, old, classic comedies really inspired us along the way.”

In case you were wondering, Gunsmoke ain’t got nothing on Sheriff Callie in terms of a colorful cast of characters! There’s Ella Cowbelle, the owner of the town’s Milkshake Saloon; Priscilla, a posh skunk who loves attention; Farmer Stinky, Priscilla’s overall-wearing cousin; Mr. Dillo, an armadillo who’s the town’s blacksmith; Uncle Bun, a kind jack rabbit who runs the general store; Doc Quakers, a smart duck who works as the town doctor; and Tio Tortuga, a very old desert turtle who loves to tell tales about the Old West. Not to forget the brothers Dirty Dan and Dusty, two javelina miners who are always causing trouble; a roadrunner named Cody who works as the Pony Express Rider; and Frida Fox, the rodeo star. Now that’s quite a cast.

Led by Mandy Moore (Tangled) as Callie, the rest of the voice cast includes toon veterans such as Lucas Grabeel, Jessica DiCicco, Mo Collins, Frida Fox, Cree Summer, Kevin Michael Richardson, Jeff Bennett, Gary Anthony Williams and Carlos Alazraqui. According to the producers, the show works on a 16-week production schedule—four weeks for pre-production, four for layouts, four for animation and four for lighting. All the pre-production is done by DHX Studios, while the actual animation is handled by Xentrix Studios in Bangalore, India, using Maya-based technology.

Both Morella and Huckins believe that we are going through a very rich and diverse period in TV animation. “I love the fact that there are so many great shows right now that are equally appealing for parents to watch with their kids,” says Huckins. “When my daughter was about four years old, there weren’t too many shows for us to watch together.”

Morella agrees. “There are so many great shows that are out there for preschoolers,” he said. “It’s gone way beyond Blue’s Clues and Dora the Explorer. You see a lot of older kids watching them. I noticed that my eight-year-old niece is watching those show because the production values are great, the designs are really interesting. It’s really fun for us to be part of this new wave of preschool show.”