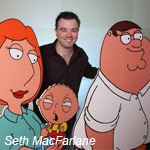 For the third consecutive time, the man behind modern animated comedy classics Family Guy, American Dad! and The Cleveland Show will serve as emcee of a Comedy Central Roast and earn a place in the record books at the host with the most return appearances. Seth MacFarlane has been tapped to be the Roast Master for the highly anticipated Roast of Charlie Sheen on the network, which will tape in Los Angeles Sept. 10 and is set to premiere on Comedy Central on Monday, Sept. 19 at 10 p.m. ET/PT.

Here is a clip from MacFarlane’s stint on the Roast of David Hasselhoff last year (warning, mature content):

“I’m very excited to work with Comedy Central again on the roast,” said MacFarlane. “Charlie is a true icon with a talent that is strong and pure and concentrated into small crystals which can be smoked or eaten.” Head of original programming and production for Comedy Central Kent Alterman added: “In addition to his sharp wit, Seth is way more suave and sophisticated than we are. We continue to try and soil him.”

Track further announcements for the Roast on its webpage or by tracking #SheenRoast on Twitter.