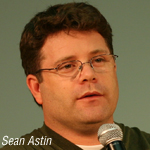 Astin, who is best known for his role as Samwise Gamgee in The Lord of the Rings and voicing the lead in the animated series Secret Agent Oso, will voice the part of Raphael. He joins fellow TMNTs Jason Biggs as Leonardo, Greg Cipes as Michelangelo and Rob Paulsen as Donatello.

“I’m excited to be joining the ranks of the newest Teenage Mutant Ninja Turtles team,” said Astin. “This franchise and these characters are beloved around the world, and I’m proud to be the next Raphael. I plan to bring the kind of passion and dedication to the role that TMNT fans have the right to expect.”

Now in production at the Nick Animation Studio in Burbank, Calif., the show is set to premiere in fall 2012.  The half-hour action-comedy series is executive produced by Ciro Nieli, Joshua Sternin and J.R. Ventimilia.

One of the most popular kids’ television programs of the 1980s, Teenage Mutant Ninja Turtles was created in 1984 by Kevin Eastman and Peter Laird. It first debuted as a successful independent comic book series and then became a hit animated TV show, a live-action television series and later spawned four theatrical releases. The property also has translated into a significant consumer products business — with DVDs, video games, toys and more — that has generated billions of dollars at retail.