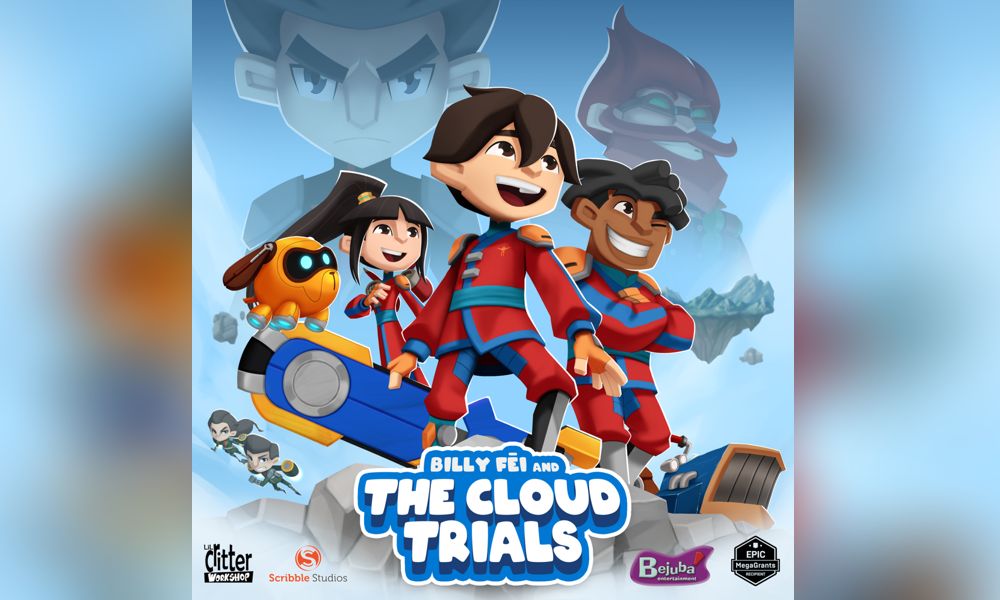 Billy Fei and the Cloud Trials

Scribble Studios and Lil Critter Workshop announced that they are recipients of an Epic MegaGrant from Epic Games. The support provided by the MegaGrant has enabled a co-development between the two Malaysian studios, and will be used to fund the upcoming CGI sci-fi action-adventure series Billy Fei and the Cloud Trials.

Launched in 2019, Epic MegaGrants is a $100 million program to globally accelerate the work of talented teams and individuals working with Unreal Engine, 3D graphics tools, and open source software.

Aimed at viewers ages six and up, Billy Fei and the Cloud Trials (26 x 22′) follows Billy, Bambin and Thoren — three mismatched heroes who are unexpectedly thrown together to compete in the Great Tournament. The trio finds themselves in daring missions with exciting chase sequences, thrilling treasure hunts and peril-filled challenges that captivate the people of Euthenia every four years.

The high-energy series promises to be fun, funny and full of heart as its young heroes learn and grow as a team, becoming fast friends in the face of constant challenges. The producers aim to deliver “breathtaking character-driven visual storytelling” powered by Unreal Engine.

Lil Critter Workshop has engaged renowned comics writer and author Cavan Scott to assist with the scripting and story. Scott has previously worked extensively on popular franchises such as Doctor Who, Adventure Time and Penguins of Madagascar, among others. One of the key collaborators of Lucasfilm’s new multimedia storytelling initiative, Star Wars: The High Republic, he also authors comics for Marvel, DC Comics, IDW and Dark Horse.

“I’m thrilled that Epic Games sees the potential in Billy Fei and the Cloud Trials. The Epic MegaGrant will help our team to explore and realize all the potential verticals for the IP,” said Walid Omar, Executive Producer of Lil Critter Workshop. “Engaging Cavan Scott to assist with the world-building expansion and scripting has been a fantastic collaborative experience. Focusing on an audience ages six to 10, the use of Unreal Engine opens up multi-platform possibilities for Billy Fei and the Cloud Trials.”

The team has brought on distributor Bejuba! Entertainment to launch the property internationally. “When Walid of Lil Critter first showed me the series and the aspirations of it, I was impressed. With the grant, and Cavan on board as writer, the series has expanded into a universe kids will want to be a part of. We’re excited to take it to market,” said Tatiana Kober, President of Bejuba! Entertainment.

Lil Critter Workshop series Hogie The Globehopper and Buck and Buddy are currently airing across the globe, with several more series in development.