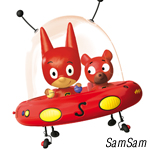 France-based Moonscoop has signed deals in Europe and Asia for its 3D animated preschooler series SamSam.

Italy’s Rai and Turner Broadcasting Italy have each acquired season two of SamSam (39 x 8 mins.) following the popularity of the series in the territory.

SamSam also continues to build a presence in Asia with Okto in Singapore and Hong Kong cable channel I-cable acquiring both seasons of the show (52 x 7 mins. and 39 x 8 mins.) and Pelican taking home video rights for Singapore and Malaysia.

The HD series was the 2009 winner of the prestigious TVFI Export Prize.

Produced by Bayard Jeunesse Animation with ARANEO, Tiji, Gulli and France 5, and distributed worldwide by Moonscoop, the show has sold globally to more than 55 territories including ITV in the UK, ABC2 Australia and TV2 Denmark. SamSam has also sold extensively in Asia to channels including Chutti TV in India, PBS Thailand and Taiwan Public TV.

SamSam follows the adventures of the smallest of heroes. For a hero, he doesn’t quite yet have super powers. But it doesn’t mean he can’t fly his own SamSaucer into space or can’t deal with dirty-rotten monsters. Sometimes he does need a little help from his cuddly SamTeddy, SamMummy or SamDaddy, as well as his friends. And granted, sometimes, using his noggin and a bit of imagination gets the work done, too. The series is based on the successful comic-book series of the same name and is a popular show across Europe especially in Italy, Spain, the United Kingdom and France.

“SamSam may be small in size but he is big in popularity,” says Lionel Marty, president worldwide zales at Moonscoop. “We’re very pleased to have secured further commitment to the series in Italy with Rai and Turner, and also with the strength of SamSam in Asia, a region where our shows are performing particularly well.”

The Hub Revives Classic Series ‘Jem and the Holograms’
Moves: Isono at BIRD; Bell Upped at MPC; Emigh to NTropic