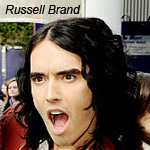 Fox TV and Chernin Entertainment are working on an animated series based on the life of British comedian and actor Russell Brand, the trades reported yesterday. The show will be written by Dan Fybel and Rich Rinaldo, who also write and exec produce Fox’s Sunday night toon Bob’s Burgers.

Brand, Fybel and Rinaldi are executive producing with Peter Chernin and Katherine Pope as well as Nik Linnen and Beau Bauman of Brand’s Branded Films. This won’t be the first time the controversial comic (who is married to singer Katy Perry) has delved in animation. He voiced characters in Illumination’s Despicable Me and Hop.

An animated Russell Brand appeared on The Simpsons