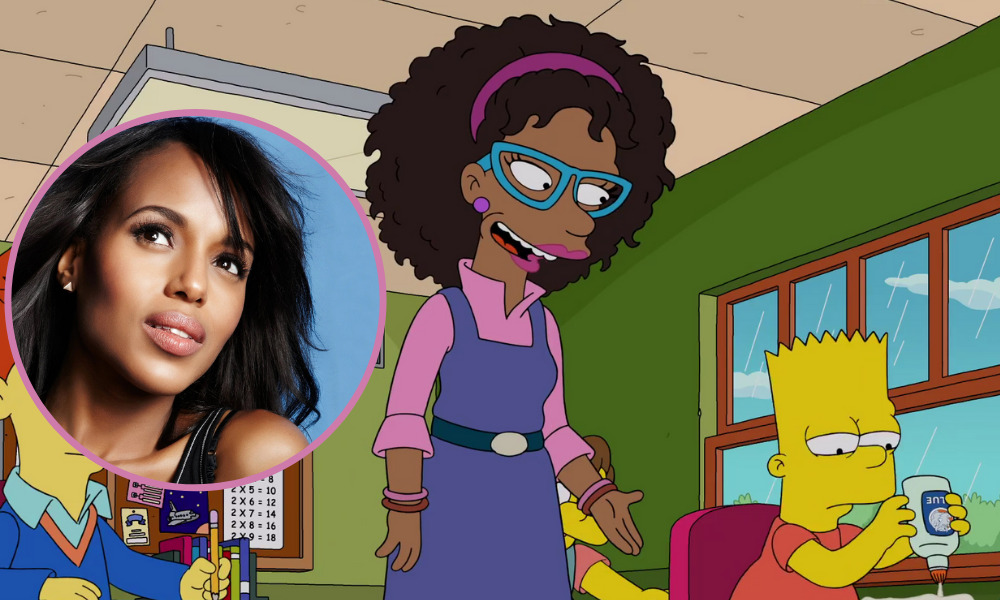 Kerry Washington's character Ms. Peyton debuted in 'The Simpsons' ep. "My Octopus and a Teacher" on April 24

The introductory episode, “My Octopus and a Teacher,” was written by co-executive producer Carolyn Omine, who describes the character as “a great teacher, but like all the best teachers, she knows that her students have just as much to teach her as she has to teach them.”

“Most of our teachers are kind of burnouts, and it’s just a function of comedy. But we thought, ‘Let’s just make this different, let’s make her a good teacher,'” Omine adds, comparing the character to enthusiastic do-gooder Leslie Knope of Parks and Recreation.

While Omine shares that she had been interested in writing a role for Washington since seeing her host Saturday Night Live in 2013, the prime opportunity came in 2020. After Hank Azaria’s announcement that he would be stepping down from voicing the Indian-American character Apu, adding momentum to calls for more diversity in voice casting for The Simpsons (and other prime time toons, like Family Guy, Big Mouth and Central Park), Washington tweeted: “Dear animators looking for black voices … I’m avail.”

While it took a minute to get the collaboration together, Washington notes that she is a “huge Simpsons fan,” adding that the role is an especially good fit: “I used to be a teacher in N.Y.C. public schools. And my mother is a retired teacher. Teaching is, to me, a sacred profession. I could only imagine the laughs involved in teaching Bart.”

In the near decade since Wallace’s passing, a series of guest stars have stepped into Bart’s classroom. Substitute teachers have included Willem Dafoe, Sofia Vergara and even Ned Flanders (Harry Shearer). The plan is for Washington’s Ms. Peyton to have a similar attendance record to the chain-smoking, cynical but greatly missed Krabappel — not in this season, but she is set to return in Season 34 (which should premiere this fall).

The Simpsons airs Sundays at 8 p.m. ET/PT on FOX. Catch up on previous seasons on Disney+.