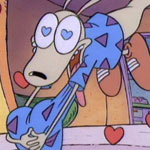 Nickelodeon has confirmed that a cavalcade of cast members from the original ‘90s series will reprise their roles for the brand-new, original, hour-long TV movie Rocko’s Modern Life: Static Cling. Written and executive produced by the hit toon’s creator, Joe Murray, the special will premiere in 2018.

Following up on Rocko’s Modern Life, which ran from 1993 to 1996, Static Cling brings Australian wallaby Rocko and his pals Heffer and Filburt back to Earth after being lost in space since ‘96. While Heffer and Filburt embrace all the modern-day technology, social media experiences and endless food truck diversity they find on their return, Rocko has trouble accepting the 21st century and believes his nostalgia for the past can protect him from the tortures of modern life.

Announced last summer, Rocko’s Modern Life: Static Cling is one of Nick’s three planned revamps of classic animated properties from its millennial-friendly portfolio. Hey Arnold!: The Jungle Movie will debut this fall, also featuring original voices and picking up where the series ended in 2004. The latest addition is a 90-minute Invader Zim TV movie.