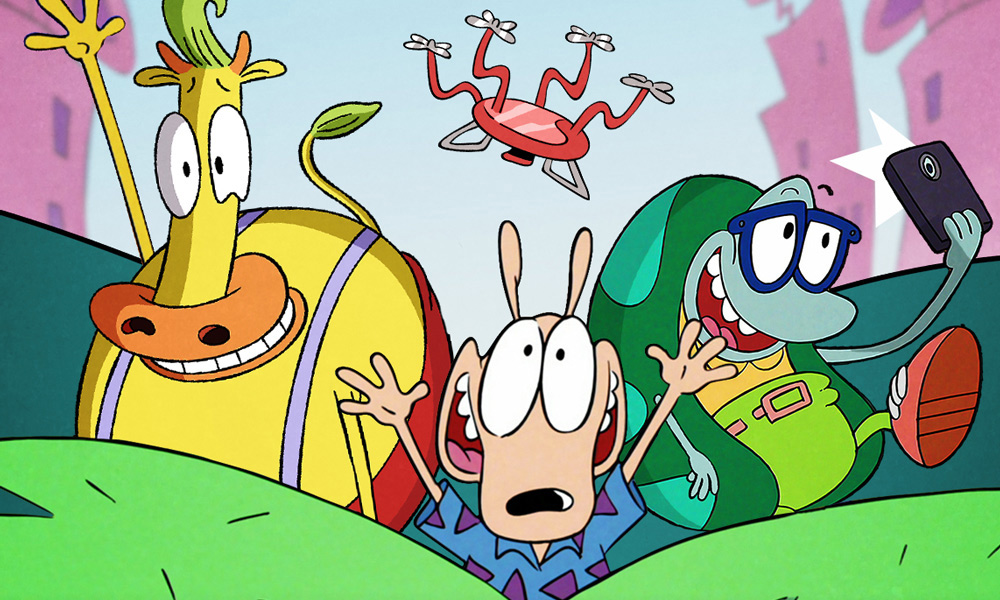 The eagerly anticipated, 45-minute movie Rocko’s Modern Life: Static Cling — launching worldwide on Netflix Friday, Aug. 9 — will see Rocko, Heffer and Filburt return to O-Town after 20 years in space to find the world greatly changed. Smartphones, food trucks and photo printing kiosks are one thing, but Rocko’s biggest culture shock is that his favorite show, The Fatheads, has been cancelled.

This show-within-a-show was created by Rachel, the child of cantankerous neighbors Mr. and Mrs. Bighead, who was called Ralph in the ‘90s cartoon. While our heroes have been away, Rachel left on a journey of self-discovery and lost touch with her parents. Learning this, Rocko sets out to find Rachel (now working in a Fatheads ice-cream truck) and help save the show.

The reveal of Rachel’s story is a big stride for trans visibility in family entertainment, joining the ranks of groundbreaking animated series like Rebecca Sugar’s Steven Universe on Cartoon Network, which was the first to feature a same-sex wedding and often touches on questions of gender identity; and Amazon’s (now canceled) Danger & Eggs, co-created by trans showrunner Shadi Petosky and spotlighting trans stories and characters.

Series creator Joe Murray will once again voice Rachel in the new adventure. He told Entertainment Weekly: “When I started writing [Static Cling], I really started latching onto the idea of change and how society has changed and what’s gone on in the last 20 years and the development of our characters and how they would react to change. It felt natural, because it was not only about change, about somebody finding who they are and making that courageous choice to go through that change.”

GLAAD Director of Transgender Representation Nick Adams, who consulted on the movie, told EW: “Rocko’s Modern Life: Static Cling tells a beautiful — and hilarious — story about accepting change. The younger characters accept Rachel immediately; recognizing she’s still their friend. And while Rachel’s father is slow to accept change within his own family, even he realizes that loving your child should be unconditional. This story of inclusion and acceptance is so needed in our current climate.”