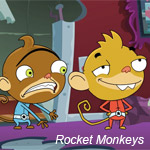 Breakthrough Entertainment’s cheeky Rocket Monkeys will make its Teletoon debut this week on Thursday January 10 at 6:30 p.m. The show, which is created by Dan Abdo and Jason Patterson and developed by Alex Galatis and Mark Evestaff, follows the adventures of two inept monkeys who spend their days wreaking havoc on an intergalactic scale. The animation is produced by Vancouver-based Atomic Cartoons (Captain Flamingo, Atomic Betty).

Featuring voice work by Mark McKinney (voice of Lord Peel), Seán Cullen (voice of Gus) and introducing Mark Edwards (voice of Wally), Rocket Monkeys explores the bizarre and hilarious cosmic exploits of primate siblings Gus and Wally. Inexplicably charged with carrying out all kinds of important missions, the brothers tend to cause more intergalactic calamity than they could ever prevent. Luckily they have plenty of help from YAY-OK, their dashing and devoted (if slightly outdated) robot.

“Rocket Monkeys is completely off-the-wall, with a comic sensibility that just screams Teletoon,” says Alan Gregg, director of original content at Teletoon. “We’re very proud of this show and we’re confident that kids are going to love it as much as we do.”

Ira Levy, Joan Lambur and Peter Williamson are the show’s exec producers. Season one consists of 13 half-hour episodes. New episodes of Rocket Monkeys will continue to air every Thursday at 6:30 p.m. as part of Teletoon’s Can’t Miss Thursdays programming block. 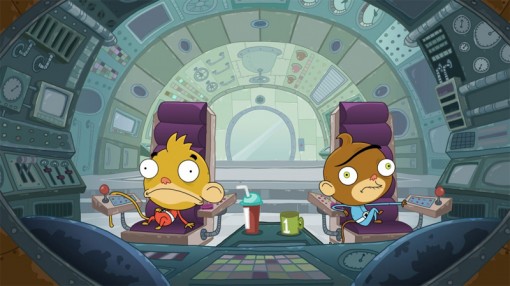