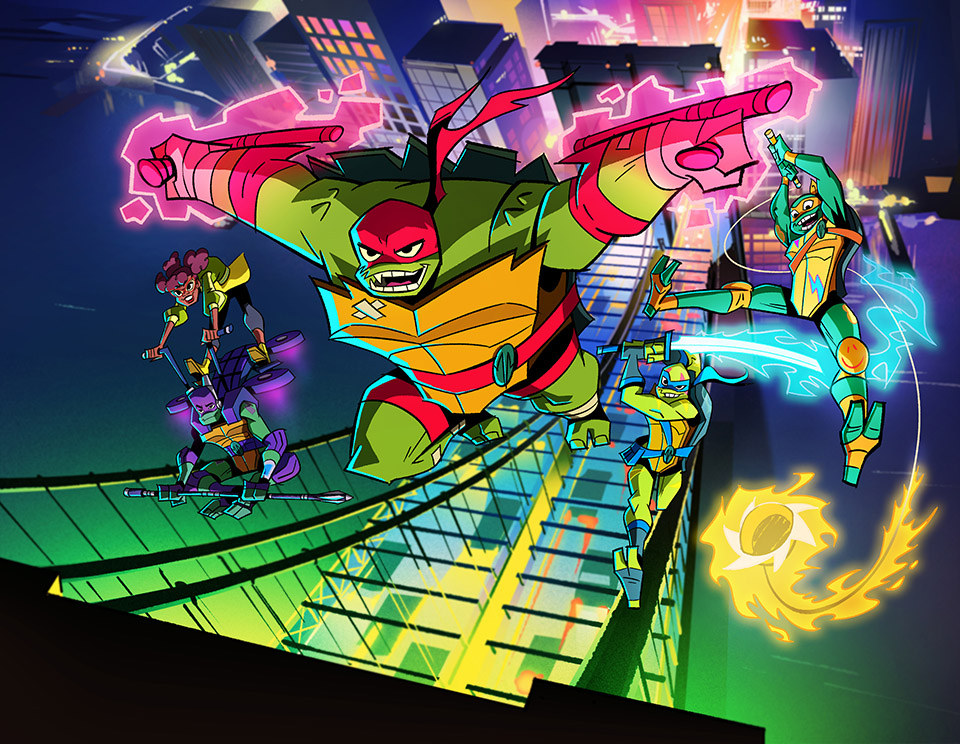 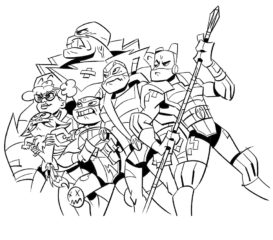 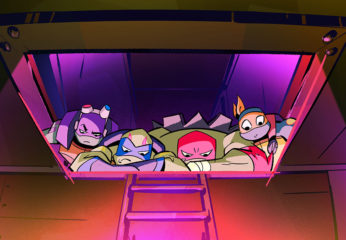 The loveable subterranean leatherbacks get a sharp reboot in Nickelodeon’s Rise of the Teenage Mutant Ninja Turtles.

It’s been 34 years since Kevin Eastman and Peter Laird’s pizza-chomping, crime-fighting heroes in a half shell made their first appearance in Mirage Studios’ comic books. This September, Leonardo, Donatello, Michelangelo and Raphael will be starring in their fourth animated series, which has stirred excitement in die-hard fans all over the world. Exec produced by animation veteran Andy Suriano (character designer on DuckTales, Mickey Mouse, Samurai Jack and Star Wars: Clone Wars) and Ant Ward (TMNT, The Penguins of Madagascar), the new 26-episode show has fans champing at the bit.

The 2D-animated Rise of the Teenage Mutant Ninja Turtles, which has been in development since the fall of 2016, finds our cool, redesigned heroes continuing their adventures in the mysterious world hidden deep in the sewers of New York City. This time around, Raphael (voiced by Omar Miller) is the leader of the gang, and Leonardo (Ben Schwartz) is  the “self-proclaimed coolest” of the boys. Donatello (Josh Brener) is still the genius, and Michelangelo (Brandon Mychal Smith) is the youngest and the family jokester. April O’Neil (Kat Graham), their human friend,  is now a young African-American girl. Splinter the rat sensei is voiced by the amazing Eric Bauza, while John Cena plays Hidden City’s mutant warrior and alchemist Baron Draxum.

“We wanted a show that kids everywhere would enjoy,” says Ward, who was also supervising producer on the Nickelodeon’s TMNT series that ran from 2012 to 2015. “The goal was to make something that took itself seriously when needed and had fun at the same time. It is a bit whimsical — and is both comedy forward and action forward.”

We didn’t want to do straight comedy or straight action … Of course, threading that needle — balancing the two elements — is a hard challenge. We also wanted to go where the other shows and movies hadn’t gone before.”

“We didn’t want to do straight comedy or straight action,” adds Suriano. “Of course, threading that needle — balancing the two elements — is a hard challenge. We also wanted to go where the other shows and movies hadn’t gone before. This gave us the opportunity to explore a different side of New York City. The 2001 incarnation was such a strong and beloved adaptation, and we felt we needed to create something entirely new.”

Going for the Euro Vibe

Since both Suriano and Ward are huge fans of European comic books and graphic novels, fans may see homages to the works of Pierre Christin, Jean-Claude Mézières and Jean “Moebius” Giraud in the new show. “Andy and I had never worked together before, but we had the same references and affection for certain European comics, which are slightly different from the superhero stuff you find on the shelves in the U.S. They have this energy, life and vibrancy on each panel, and they seemed to fit perfectly with a 2D-animated series.”

Unlike some of the previous incarnations, each one of the brothers has his own distinct design and costume: softshell Donatello sports a hi-tech bo staff, Leonardo is a red-eared slider with an odachi sword, Raphael is a snapping turtle with tonfa sticks and a jagged shell, and Michelangelo is a box turtle who uses a kusari-fundo (weighted chain) as his weapon! “We felt as if each brother’s look needed to reflect their personalities,” says Suriano. “The question was what shape language would best bring out the characters. The goal was to offer a unique take on familiar archetypes.”

The creators also played around with the dynamics of the brothers. “We wanted to shake things up, so we thought this gives us the opportunity to really develop Leonardo’s character, for example,” explains Ward. “He has been the lone, stoic leader. We figured, what if Raphael wasn’t the angry guy … he is the oldest brother, and the eldest usually ends up being the leader of the pack. That frees up Leonardo to be the kind of character who doesn’t want to deal with leadership! We play up the familiar sibling rivalry in unexpected ways.”

We felt as if each brother’s look needed to reflect their personalities. The question was what shape language would bring out the characters best. The goal was to offer a unique take on familiar archetypes.”

The team is also very pleased with their new feisty April. “We love her,” says Ward. “She is strong, confident and definitely a key member of the team. You don’t want to mess with her. We wanted to make a real character that the Turtles could joke with and have fun adventures with. She has a definite strong point of view in every story that we tell with her.”

Suriano also loves the new version of Splinter. “We added a lot of dimensionality to who he is as a person,” he notes. “As we start the show, we see more of the father figure rather than just the ninja.” “I absolutely love our Splinter,” adds Ward. “Eric Bauza is amazing, and he brings so much whimsy, warmth and wisdom to the part.”

As usual, New York City is the playground for the pizza-loving heroes, but this time around, there is more to the Big Apple than meets the eyes. “The modern sides of cities like New York, Paris, London is always changing,” explains Ward. “They are always building and reinventing themselves, and we wanted to reflect that in the show. We wanted to celebrate the cultural melting pot aspects of the city, too — beyond Hell’s Kitchen and the dark alleys of the comic book. We wanted to bring new dimensions to create a show that popped rhythmically with this dynamic energy.”
The creators also spent a lot of time developing the subterranean world that co-exists in the Turtles’ universe.  As Ward puts it, “We are huge fans of epic fantasy landscapes, and a key element of the show is the hidden city beneath New York. It’s a mystical secret world that is a big part of the their world.”

While the designs,  pre-production, storyboards, recordings and final color fixes are all done at Nickelodeon in Burbank, the animation production is handled by Flying Bark Studios (Blinky Bill, Maya the Bee: The Honey Games) in Sydney, Australia, which use Toon Boom Harmony to deliver the 2D animation. Although the show is script-based, the team also works closely with the board artists to bring each episode to life. “I know a lot of people say this, but everyone really contributes when it comes to producing the show,” says Ward. “We like to keep our doors open, and we truly value our crew’s opinions and encourage the team to work together and contribute.”

Ward and Suriano are quick to mention that this new Turtles experience has been one of the highlights of their careers. “I have been doing this for more than 20 years now, and I get to work with a lot of great, new storytellers.” As Ward puts it, “It’s been a great honor to be part of the franchise again. It opens up a world of creativity, and it’s fun to be part of the whole new side of this franchise that has never been seen before.”

They are also both aware of how passionately fans feel about their green heroes. “We are creating something that is entirely new, but we are respectful of the fans because we love the Ninja Turtles,” says Ward. “For over 30 years, fans have had different reactions and opinions about each of the new incarnations … It’s all about being respectful to their opinions, but steering the course for what we’re doing.”

Suriano agrees. “We are very ambitious, and we were pleasantly surprised the Nick has been so supportive of the lofty goals we set for ourselves. We have met most of them, so we’ve surprised ourselves as well. The challenge is always finding the balance of ambition and what you can actually achieve. We’re trying to push ourselves and challenge ourselves to do things we have never done before in our careers!”

Ward says in today’s world where there is so much animated content to be viewed, it’s even more important to offer something that is not just the same old thing. “We have worked on a lot of shows before, and there’s a lot of great content out there. But the fact is that there is a lot of content that is very similar. The same formulas have been established. We wanted to step back and strive to do something different. Everything that we do is kind of immortal now thanks to the internet.  If people like the content, it can stick around forever. That pushes creators to work harder to offer better content to stand out in the crowd.” Or as the green guys would say: “Don’t be afraid to be totally, super rad, dude!”

Rise of the Teenage Mutant Ninja Turtles will premiere on Nickelodeon in September. A panel featuring the show’s creators and voice cast is planned for Comic-Con in July.