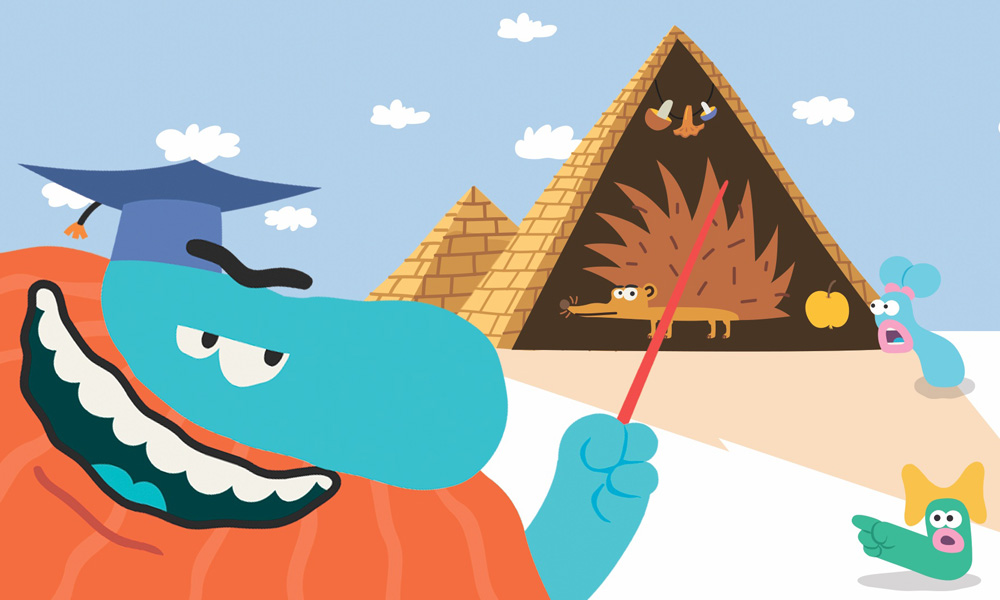 Parents searching for new ways to improve their kids’ reading skills need to look no further than Beardy Bodo, the charming new animated show from the creative team at Riki Group. The lead character, who is a grouchy man with an enormous beard, doesn’t know how to read very well himself, but he invites kids to solve simple puzzles and fun reading activities to improve their skills. As the show’s tagline promises, Beardy Bodo “knows nothing, but he’ll teach anything and everything!”

The origin of the show, according to director Vladimir Sakhnovskiy, goes back to the summer of 2014. He recalls, “I was visiting my sister and her husband in Germany and we wanted to create an educational series for children on YouTube. So, I came up with several concepts. The idea with the grumpy teacher seemed to be the most interesting. My sister genuinely laughed at my animatic and gave the character the German name ‘Bodo’ and then added the adjective ‘Beardy.’ That’s how our character was born!”

Riki Group’s head of development Maria Tereshchenko, who is also the show’s creative producer, says about five years ago the development department at the studio was looking for strong preschool and educational shows. “That’s how Bodo was introduced to us,” she recalls. “At first, it was a character and a concept outlined in general terms. Then, through the process of development the character’s appearance was refined and, of course, a lot of effort was invested in creating the scripts for the show, which was a real challenge. We wanted to make short episodes that would combine educational content with absurdity (which is not easy), and at the same time fully embody the vivid character that Vladimir had created.” 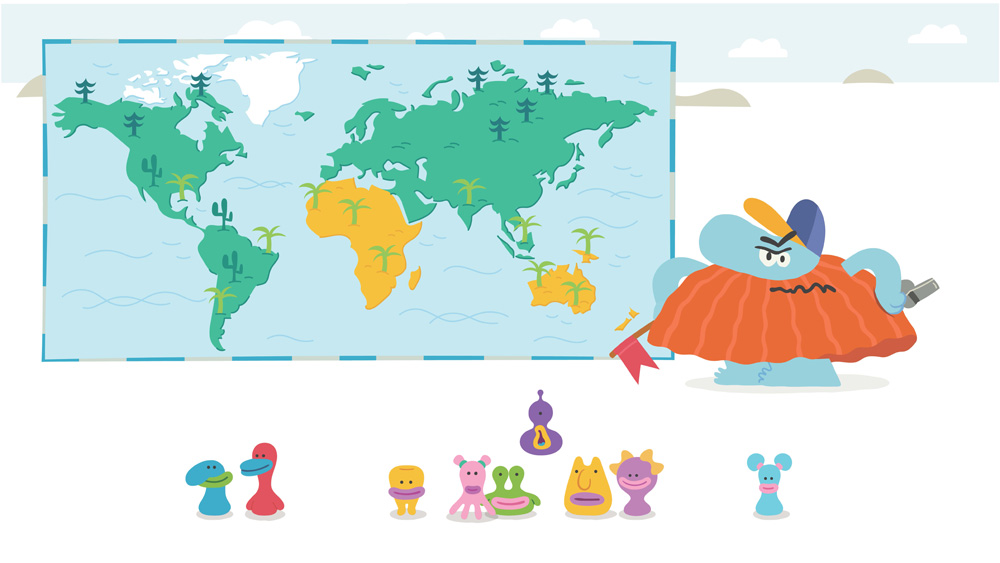 Tereshchenko says her own son served as a source of inspiration for the show.

“When he was younger, he regularly and confidently advocated various ridiculous ideas, and never got upset when he found out he was wrong! He easily and charmingly changed his mind promoting something else with the same fervor. Our Beardy Bodo Travel season was inspired by our own traveling experiences. Our whole team is really enthusiastic about traveling. So, a lot of the stories, conflicts and places featured on the show are based on our personal experiences — perhaps a little bit reworked in creative ways”

Sakhnovoskiy adds, “Back then, you could make an educational animated series inexpensively from scratch, and it could get tens of millions of views. It seemed like a good business model. I came up with the idea of a series that I could do on my own, with no third-party investments needed. And then the Bodo project won the contest launched by Riki Group, so I didn’t have to do it from scratch and all by myself!”

In the first season, Beardy Bodo A-B-C, the creative team opted for a certain simplicity.

“We didn’t want anything superfluous either on the screen or in the characters’ movements,” says Tereshchenko. “An ABC book usually only has a picture of a subject and a caption. This explains the white backgrounds and the very conventional, often abstract depiction of the environment, the objects that do not fall into the focus of our narrative. At the same time, we wanted to achieve a balance between the artistry of modern books for children and the intelligibility of the images, which is clearly necessary for such an educational project.”

As the show’s producer Desislava Medkova points out, Beardy Bodo features limited animation based on the expressive poses of the characters, especially the main one. “I would like to note that this style of animation has a side effect!” she says. “It gives incredible pleasure to those who are involved in the marketing of the project, including myself, as it is an inexhaustible source of various promotional materials. Thanks to the chosen style of animation, freeze frames are incredibly impressive, and there is a huge number of excellent expressive poses of characters available for the creation of banners, posters (and we make a new banner for each new episode), for the development of the brand book and licensed products. The lead director and the lead animator supervise the creation of the layouts very carefully to make sure that Bodo’s poses are as eye-catching as possible!”

The creative team relies on 2D cut-out animation, in conjunction with frame-by-frame animation to produce the series. “One of the attractive features of our series is the transformation of the characters,” says the producer. “This includes both Beardy Bodo, whose beard has transformed to numerous things in the past few years, and his helper friends, the Morphs, which can turn into absolutely anything!” 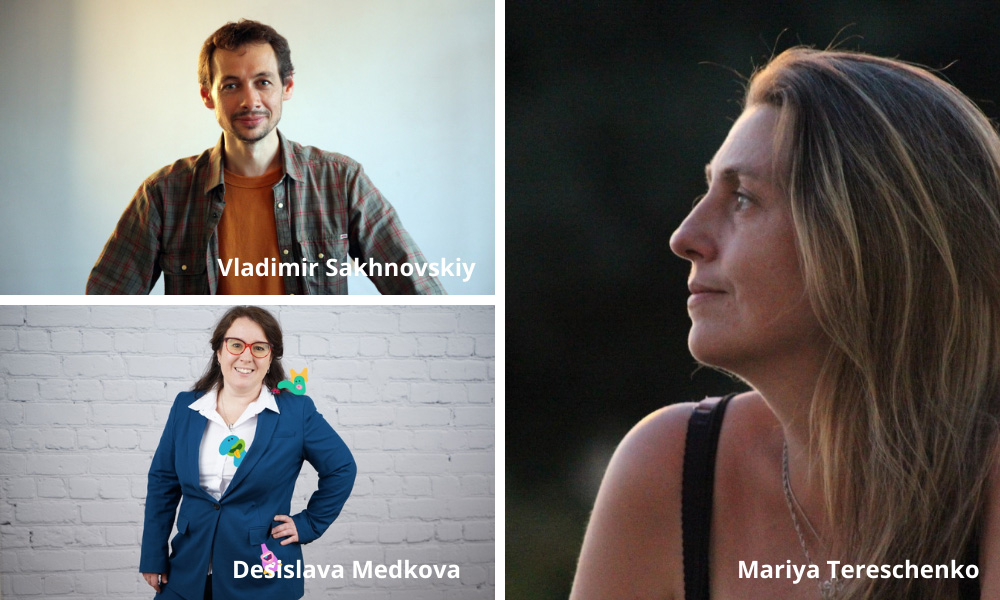 According to Medkova, more than a hundred people have worked on the show to date. “We work with many of our writers online, which allows us to bring in people from all over the world,” she explains. “The easternmost point of our project’s geography is Vladivostok and the westernmost point is Peru. Yes, some of the work is done in the offices in Moscow and St. Petersburg, but we don’t limit ourselves to these two cities when it comes to choosing authors.

We are very flexible when it comes to cooperation. Once we even invited a team of animators engaged in both clay and 3D animation, as well as the famous animation director Sasha Svirsky [My Galactic Twin Galaction] to create a unique episode featuring Bodo travelling through cartoons made in different animation techniques. In total, more than 50 people worked on that specific episode.

Beardy Bodo‘s creators believe that a variety of factors worked together to make it such a success. “We have a wonderful team, and everyone does amazing work — the artists, cartoonists, directors, composers, sound designers; they all do their best,” says Tereshchenko. “I think a viewer cannot help but appreciate it. We also think we have found and managed to bring to life a very charming and outstanding personality, which is impossible not to fall in love with!”

She also believes that the series serves as a great opportunity to encourage children’s thirst for knowledge and make reading and learning a fun, positive experience. “It seems to me that as a team we somehow managed not to lose those cognitive instincts in the process while diving deeply into the topics we chose to explore. So, I hope we are able to engage kids and maybe even their parents in this fascinating learning game.”

Medkova gives a lot of credit to Riki Group’s partners, including the Russian Geographic Society, which allocated a grant for the Bodo Travel season’s development, and the Russian Federation’s Ministry of Culture, which has supported the show for three years. In 2020 the show was highly valued by IVI, Russia’s largest online video streaming platform. IVI became a partner in the show’s production, ensuring a successful launch and further promotion of the series. There are more than 10 million views of the 40 Beardy Bodo episodes on IVI to date.

Of course, what makes the venture even more meaningful is the memorable response from young audiences. “I remember when my friend’s three-year-old son retold episodes about the Sahara and the great pyramid at Giza,” says Tereshchenko. “He explained everything about the Sahara very confidently. When asked if the pyramids had refrigerators, he replied, ‘Some do, but not all of them.’ It was very amusing. I was even creatively jealous — his retelling was better than the episode itself!”

Medkova says she is very touched when people who don’t work in the animation industry recognize the show’s characters, the Morphs. She recalls the very first time, “I was going on vacation, and was waiting in line to board a plane, when two kids with their family recognized the Morph characters on my t-shirt. The young girl started to shout happily, ‘Riki, Riki, the Morphs!’ When I confessed that I was the show’s producer, all the members of the family told me how much they loved Beardy Bodo. The boy told me that he watched Bodo Travel, and the mother said that they had watched the A-B-C season many times. But what impressed me most of all was that the father entered the conversation and said that most of all he adored the Bodo songs! We had set out to make a series that parents could watch with their children. At that moment, I realized that we had really achieved our goal!”

Teaser: DreamWorks Dragons Take Flight for the Future in ‘The Nine Realms’
‘We the People’ Director Victoria Vincent Developing ‘Dirt Girls’ at Fox