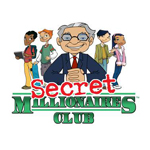 The Hub has announced five new animated series — including a new series from the creators of Yo Gabba Gabba, an animated version of Warren Buffett, and a Transformers spinoff tentatively called Rescue Bots —and eight returning favorites at its annual upfront presentation to advertisers in New York.

The new original animated series, as announced at the event by The Hub president and CEO Margaret Loesch, are:

Overall, the network announced 425 half-hours of new production. “In the short period of time we’ve been a newly branded network, we’ve seen that our strategy of providing quality, engaging entertainment to kids and their families — in an environment where they can watch and enjoy programs together — is exactly the right space for us,” said Loesch. “We have a tremendous advantage with strong, proven brands, and we are working with some of the best creative minds to bring those brands to life across multiple platforms and also to create new properties that will become future brands. The programs that we are announcing today will add strength, dimension and excitement to a schedule that is already resonating with viewers and building an extremely loyal audience.”

The network also announced the return of the following animated series: