After eight successful seasons, Cartoon Network has announced that JG Quintel’s Emmy-winning animated series Regular Show will shortly embark on its eighth and final season. The endgame will begin Monday, September 26 at 8 p.m. ET/PT with the season 8 premiere “One Space at a Time,” with new episodes airing weeknights through January 2017.

Following last seasons’ cliffhanger finale, which ripped The Park off the face of the earth and took Mordecai, Rigby and the crew away with it, season eight will take place entirely in outer space as the blue jay and raccoon buds take on the ultimate intergalactic battle of good and evil — promising that the show’s bittersweet farewell will be entirely out of this world.

“From JG’s original pitch on post-it notes, through eight successful seasons and more than 250 episodes produced, Regular Show has been one of the most original animated series of this generation creating indelible characters and signature comedy mayhem laced with heart,” said Cartoon Network chief content officer Rob Sorcher. “Our sincere thanks to this talented crew and cast for their incredible dedication, and I’m proud that they all agreed to go up in space together for one hilarious final journey.”

Regular Show has been a fan-favorite on Cartoon Network since it launched in 2010 (when Animag profiled Quintel in that year’s Rising Stars feature). The young show creator first conceived the show while a student at CalArts, and it became the first series greenlit through Cartoon Network Studio’s award-winning Artist Program in 2008. Since then, the long-running adventures of groundskeepers Mordecai (voiced by Quintel) and Rigby (William Salyers), — along with Skips (Mark Hamill), Pops, Benson and Muscle Man (Sam Marin) — has earned a Primetime Emmy Award for Outstanding Short-Format Animated Program (“Eggscellent,” 2012) and been nominated for five Emmys, also inspiring Regular Show: The Movie which debuted on Cartoon Network in 2015.

“Making Regular Show has been so much fun,” said Quintel. “We got to tell all of the stories we wanted to tell, and making the choice to go out exactly how we want to go out. We’re so proud and excited for people to see how we’re wrapping things up in a big, big way. We’re bringing everything full circle.” 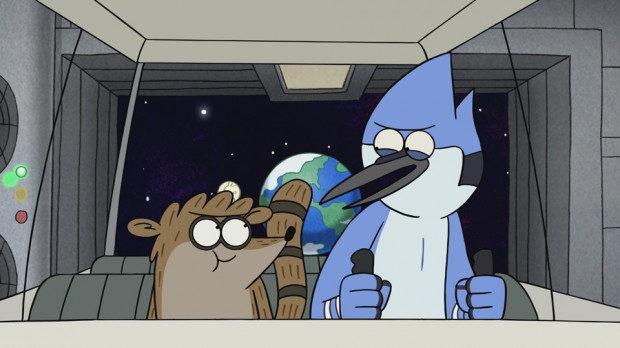