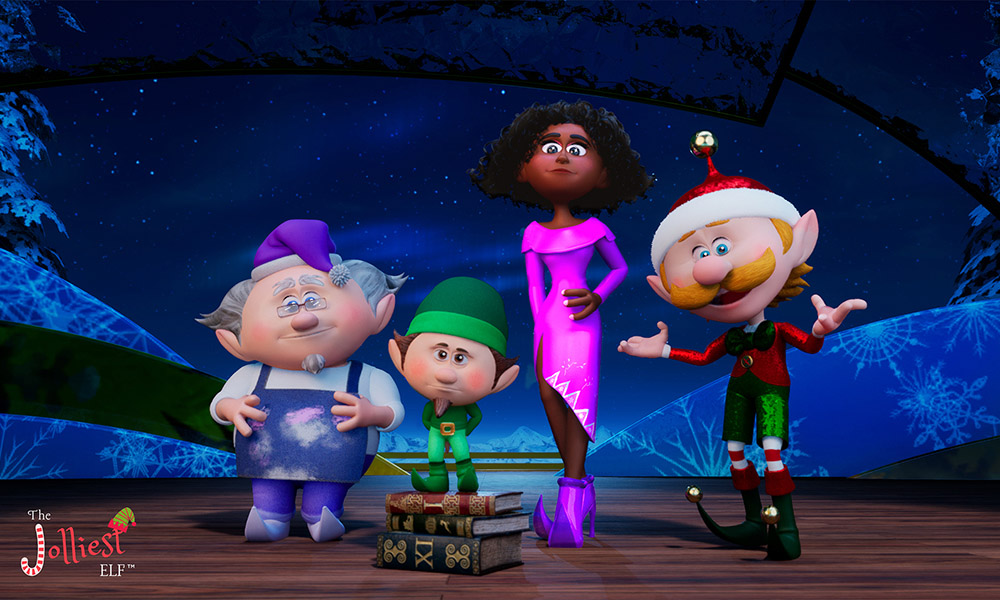 Director Chad Eikhoff (The Elf on the Shelf: An Elf’s Story), founder of TRICK 3D, has collaborated with Noitom International, Inc. to produce a new 3D animated series, The Jolliest Elf. Premiering this December, the 12-episode production was completed in less than a year using an all-new, fast-track production pipeline applying real-time gaming engines and motion capture technologies.

Based on the notion of a Christmas-y talent competition show, the series follows what happens as five contestants from across Santa’s Village in The North Pole compete on stage to win the title of ‘Jolliest Elf.’ They perform for charismatic host, Mr. Jingles, and three lovable judges: the glamorous and talented Glo; the hard-to-please critic Tiny; and the lovable and encouraging Frosty. Viewers will have the opportunity to vote on their favorite contestants as episodes release and votes will be tallied before the final episode to reveal the winner.

Utilizing Noitom’s virtual production pipeline, NoitomVPS, TRICK 3D was able to significantly cut down production time. The application of virtual production to traditional animation not only resulted in a faster workflow, but also reduced cost. The motion-capture system, paired with Notiom’s Perception Neuron Studio suit and Epic Games’ Unreal Engine, delivered final render quality, providing instant results for the director and creative team, offering the flexibility to experiment with shots and environments at any point in the production.

“You can have a real-life motion-capture session while also having facial capture being done and recording audio and you get to see the scene at render quality in real time while you’re doing it,” said Alberto Alvarez, Technical Director at Noitom International, Inc. “So you have an exact idea of what it’s going to look like the day you capture with talent.”

While the use of virtual production tools has become more prevalent for production teams, the expensive equipment remains out of reach for many creators and small studios. The NoitomVPS system, available for less than $50,000, enabled the TRICK 3D team to blaze a new trail in the animation industry and set new standards for production time, quality and efficiency.

“This is all very cool technology,” said Eikhoff. “That said, what’s this tech let me do exactly? Well, when these technologies are all combined and applied to animation, the main thing we get is creative freedom. And with that creative freedom come all sorts of savings in time and budget. As the director, I can be inside of the animated world thanks to VR. I can direct live performance and capture live cameras all at the same time. And, I can see it all in final quality. These new technologies give me the ability to create quickly and edit frequently, all while being in and seeing the final render quality imagery.”

The successful completion of The Jolliest Elf serves as an example of how to use new technologies to create animated content in real-time. The state-of-the-art technology requires a smaller crew than traditional productions and is completely portable, making it an essential tool for remote collaboration and when social distancing protocols are in place.

“To bring mocap into animation has been a little bit of a challenge,” said Roch Nakajima, President of Noitom International, Inc. “But once people see how liberating it is, especially from the animator’s side, then, we’re [Noitom and TRICK 3D] both in agreement that it has a huge potential for the future.”

Both Nakajima and Eikhoff will share more about this production process at IBC 2021 in Amsterdam on December 4. Children and families around the world will be able to experience The Jolliest Elf this holiday season on their favorite streaming platforms, including Discovery Kids, Kidoodle.TV, Amazon Prime and others.

Award-Winning VFX Studio Framestore Opens New Mumbai Studio
An Otter Like No Other: Maxime Le Chapelain on Creating the Award-Winning Short ‘I Am a Pebble’