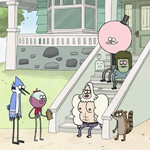 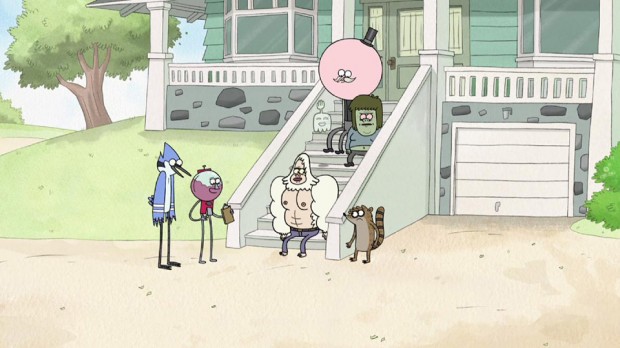 J.G. Quintel talks about finding a satisfying ending for himself, the crew and the characters of his long-running Cartoon Network series Regular Show.

Creating a hit TV series is a dream come true for most toon makers, but even the most successful and popular shows — The Simpsons excluded, it seems — must end.

But be they live-action or animated, few shows in recent memory succeeded in ending as well as Cartoon Network’s Regular Show, which capped Jan. 16 its eight-season run with a finale that was exciting, funny, satisfying, but also nuanced and thoughtful.

Spun out of creator J.G. Quintel’s student films and college experiences, the series about pals Mordecai and Rigby, who slack off with their friends while keeping their jobs as park groundskeepers, proved an emotional one for fans and the show’s creators. Shortly after the finale aired, Quintel spoke with Animation Magazine about the show and its ending.

Animation Magazine: At what point did you start thinking about how this show was going to end?

J.G. Quintel: It was in the middle of season seven that we started to realize we were going to get another pickup, but for less (episodes) than what we had gotten in the past. I had always told the network, just let us know if you’re ready to end it, let’s talk about it, because I want to end the show properly. I don’t want it to be something where we get caught off guard and then it just kind of is over. We could make something really cool. So we talked about it, and we were like, yeah, this is probably going to be the last season, so let’s start thinking about what that’s going to mean for us. There were a couple of ideas that had floated around in the Regular Show universe that had never made it out, like the idea of Lolliland, which is where Pops is from in the student film. That was a big idea I always kind of gravitated back toward, but it didn’t feel right in the middle of the series. And then the idea of taking them to space was always something where it was like, “Ah! … but it’s not going to be good.” But that’s the end, so it doesn’t matter. It was kind of fun to have this final season to try out a bunch of things that you wouldn’t do otherwise and I think it really freed us to make something really out there.

Animag: Looking at the last season as a whole, what were the big creative challenges?

Quintel: Well, we took it to space, which was tricky because we knew it was going to make a lot of people turn off. Like, “Ugh! Space! Jumping the shark!” But we were like, we want to take it there, to this intergalactic battle. It was a lot of content to fill, so we had our traditional fun episodes at the top, but then we were simultaneously writing our more plot-heavy episodes that were going to take the whole arc of the series to a close, that we needed to pepper in and figure out when those episodes were going to hit. And hopefully everybody would watch them all, because this is the first time we’d ever made a season that you need to watch it in order for it to make sense.

And then wrapping it all up, that was definitely a challenge, trying to figure out how to make sure that we were going to satisfy all the things people would want to see and what we wanted to see and kind of top ourselves because we’ve done a lot of crazy things over the years. But I feel we figured it out and put in a bunch of things we had never done and a bunch of things I don’t think you could do unless you were going from that long of a run and ending it.

Animag: Were there any things that you wanted to get into the final season that you didn’t?

Quintel: Margaret and C.J. — that was a very big part of the show for Mordecai that kind of filtered through, and it was something where I knew it would be nice if we could make that work, but I knew that there were two camps: People who liked Margaret and people who liked C.J.. And with the way we played that story out, it feels like (Mordecai) messed it up for both of them. There was no way he could get either of them back. It turned into this thing where you felt like, for Mordecai, the reality for him was he learned from his mistake and was able to move on. But because we had Margaret and C.J. in so many of the episodes, it feels a little bit weird not to have them represented more in the end.

Animag: Now that the series is complete and you can look back at where you started from, what is the biggest lesson you’ve learned or taken away from the entire experience?

Quintel: It’s all about character. Make sure that you have really solid characters and then you can put them in any situation and they’ll be funny. It doesn’t matter what they’re doing. I think, looking back on it, it was lucky. All the characters that I put in — I could have put some bad ones in, but they all just jelled and it was very smooth sailing. I don’t know if I thought any more about it than this guy’s funny, I want to put him in.

Animag: Do you have an episode that you’d say is your favorite?

Quintel: I still really like “Eggcellent.” I thought that was a really powerful friendship episode and had a fun, weird element to it. “The Power” is still a really special one. I like all the baby ducks episodes and all the laser disc episodes, the format wars. And then the finale now. Episodes like that finale don’t come along that often, so that one is definitely one of my favorites.

Animag: I’ll flip that around: Are there any episodes you feel like didn’t live up to your standards or were the worst?

Quintel: (Laughs.) Let’s see, I have the list in front of me and it’s huge. I think I remember “Replaced,” which is one where Vincent almost replaces Mordecai and Rigby with these two other workers. That one was for some reason a tough one and it didn’t have that special spark for me. And there’s a couple others. There’s some that just work so well and then there’s others where you’re like, hmm, that feels like we already did that before. But we always tried really hard to make them unique and different.

Animag: What do you have planned next?

Quintel: I want to make another show, so I’m thinking of stuff. I’ll probably enjoy a little bit of a break. It’s been an insane amount of time working on this show. I remember when I first started, them telling me, “You know, it’s going to be a lot of work.” And I was like, “Yeah, yeah, that’s cool.” Six years later, I’m like, “Oh my god! That was so much work!”

A longer version of this interview can be found online at www.animationmagazine.net/regularshow.