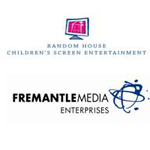 Random House and FremantleMedia have agreed to launch a pair of global kids entertainment brands.

Both shows will be jointly produced and financed by RHCSE and FME, with FME taking on worldwide distribution, licensing and home entertainment rights. The initial focus for both properties will be for television broadcast, with scope to develop into additional areas including games and toys. Both properties will appeal to kids across a broad spectrum of demographics.

Fish Head Steve is based on the Jamie Smart comic strip originally published by David Fickling in the weekly children’s comic, the DFC. Fish Head Steve is a surreal comedy-soap about everyday events in Spumville where, in a flash, the heads of the townsfolk have been mysteriously swapped for household objects and family pets.