IFC will premiere a new animated comedy titled Out There in January 2013. The cabler announced the news at its upfront event in New York City this week. The 10-part half-hour series is written and exec produced by Emmy-winning director and producer Ryan Quincy, who was a longtime animation director on South Park.

Out There follows the coming-of-age adventures of Chad, his little brother Jay and best friend Chris. Living in a small town, the boys run face first into the wall of adolescence, the horrors of puberty, first loves, mortal enemies, local legends, and social ostracism. They experience the wonderment and frustration of that terrifying limbo between childhood and adulthood as they learn that growing up is weird to do …out there.

The series is produced for IFC by 20th Century Fox Television. 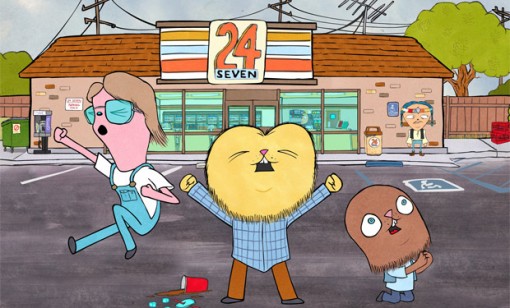 You may also like...
Related Topics:20th Century Fox Television, IFC, Out There, Ryan Quincy, South Park

Pizza Planet: It Delivers, Again and Again!
CITV’s ‘Fleabag Monkeyface’ Jumps Out of the Bag