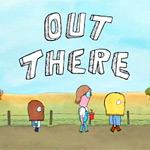 Cheer up, Generation X: There’s a new adult-targeted toon on the TV block that’s more about finding the humor in growing pains than cheap laughs in gas pains. Starting this month on IFC, a labor-of-love animated series from Emmy Award-winning South Park animation director and producer Ryan Quincy, titled Out There, will explore the awkwardness of adolescence through the friendship of two teen misfits.

The series centers on socially inept Chad (voiced by Quincy), a melancholy 15-year old clinging to his childhood comforts while teetering on the brink of maturity. Together with his best friend Chris (Justin Roiland), an utterly unhinged outcast; and little brother Jay (Kate Micucci), Chris navigates the bleak landscape of his small town, confronts the perils of youth and explores the terrifying limbo between childhood and adulthood. Pamela Adlon, Fred Armisen, Linda Cardellini, John DiMaggio and Megan Mullally also star as off-kilter friends and family.

“A lot of it is based on my childhood and adolescence growing up in Nebraska in the late ‘80s and early ‘90s; a time that predates computers and cell phones and Facebook. A time when you weren’t as connected, and also a time when you were 14 and 15 years old and didn’t have money and had to walk everywhere, and felt kind of stuck,” Quincy explains. 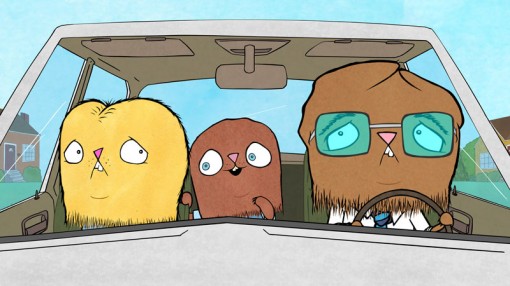 “There’s kind of a nostalgia factor—although we never go out and say what year it’s set in. I think people who are fans of Freaks and Geeks will identify with it—we’re kindred spirits with those types of coming-of-age shows. What’s different about Out There is its fresher look … There’s a lot of heart there, but it’s not as sappy and syrupy,” he adds. “It’s a very reflective show, looking back on coming of age, and that’s a well-trodden road. But I think we have some really funny characters and a great cast, and that’s what’s going to set it apart.”

While getting his own show is a dream come true for the animation veteran—who served on the South Park crew for 14 years before forging his own path—it was far from a straight shot to get there. He first came up with the concept back in 2008 when former South Park producer Jennifer Howell, then senior VP of animation at 20th Century Fox Television, invited him to participate in the Incubation shorts program. Quincy pumped out three shorts about Chad and Chris, and made it all the way to a pilot script before the network ultimately passed. Despite plenty of positive feedback, the pilot bounced between networks that never quite fit.

“Everyone loved it, but there was always something that didn’t work out,” Quincy recalls. “They never embraced it for what it was. During these years it was in what they call ‘development hell.’ I thought, is this ever going to happen?” 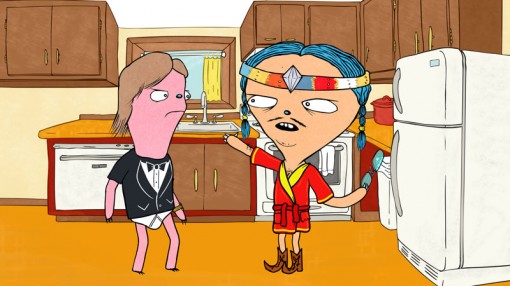 Just when it seemed time to give up, IFC started building its original programming slate and Quincy says the network felt like a “custom fit” for the project. With the enthusiastic support of IFC’s VP of development & production Dan Pasternack (as well as production partner support from Fox), Out There was embraced—gawkiness and all.

After writing a new pilot in 2011 which reveals how BFFs Chris and Chad first meet, and signing a 10 half-hour episode deal with IFC, serious production got underway in March of 2012. Coming from the insulated, everything in-house world of South Park, Quincy notes there has been a bit of a learning curve when it comes to this new project. The animation is being handled by Bento Box (Bob’s Burgers), which is based in Burbank but set up a satellite studio in Atlanta staffed with 80 animators to work on the series. Quincy and a small writing, editing and production team are based out of L.A., where they also do the voice recordings.

“It took me a little while to get use to working with animators in Atlanta and not just face to face, but I think we’re figuring it out,” says Quincy. “It’s all made in America, which is really cool. It’s also nice that the time zone differences aren’t that bad, so if we need to communicate we do our Skype calls and e-mails and iChat … We’ll do a lot of getting out our iPhones and taking videos of acting something out and sending it to them for reference.” 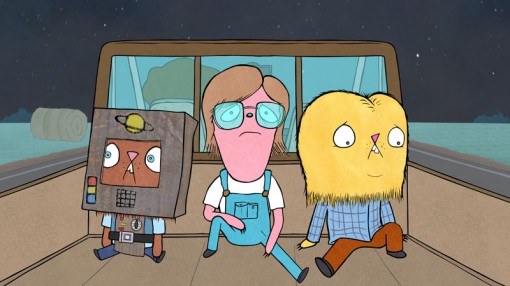 As Quincy notes, one of the standout features of Out There is its unique look—both in terms of its quirky character design and watercolor-like palette that meshes well with the introspective, nostalgic vibe. In this way Quincy and his team, working in Toon Boom’s flexible Harmony software, fought against the standard digital 2D model of bold outlines, popping colors and near-spastic action.

“It definitely has more of an illustrative look,” says the helmer, who cites children’s authors Dr. Seuss, Richard Scarry and William Steig as well as early Disney toons and Jim Henson’s Muppets as key influences. “I wanted to use the textures to make it feel kind of hand-drawn and not so digital and ‘Flash-looking’ … for a lot of the textures, I would create swatches with Prismacolor pencils. Instead of those sort of flat fills that are common in cartoons, I wanted to give it more of a storybook feel that was more organic; more like there’s an actual human hand behind it. There is digital stuff, but we try to cheat it.”

Additionally, the slow-burning pace of the show meant Quincy and his crew had to steer clear of the loud, fast-paced, broad caricature voices so common in animated series. 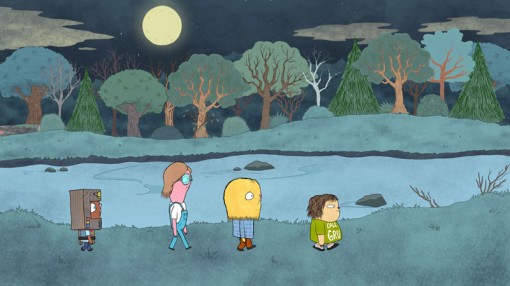 “We had to tell the voice actors we just need to bring it down a lot, make it more naturalistic, more conversational, but still bring character to it,” he says. “It’s more of an animated dramedy than a Family Guy.”

Despite working out the kinks of cross-country collaboration and adjusting to the ever-building snowball effect of TV production deadlines—not to mention the juggling act required to direct, write, produce and star in the show—Quincy says the team is settling in to the grind nicely. With four episodes done and the air date seemingly minutes away, the creator says he’s found time management to be a crucial skill.

“You kind of have one chance to thread the needle on a lot of this because of the time frame, but it just makes it exciting,” he says. “I’ll always go to the last minute—that’s the nature of anyone. It’s that clichéd thing; you never complete it, you just have to abandon it. But I’ve been really happy with what we’ve done.” He adds that another key lesson was learning how to be more assertive and know what he wants and how to articulate that to the team. 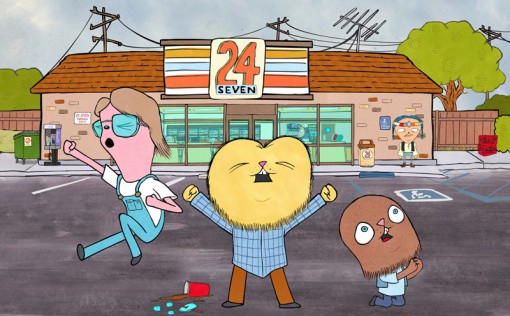 Seeing as he’s on his way to living out most animators’ dreams, we had to ask Quincy about his advice for other aspiring artists:

“It’s just perseverance. I moved out to L.A. when I was 24, and I thought I’d show up and get my own show right away … and it took 16 years for it to finally happen,” he cautions. “But all the stuff that happened was all leading up to this, it was all a learning experience. The job at South Park was incredible—it was like going to film school while I was there. You learn so much  … Just persevere and make stuff—make something and finish it. So many times you have these great ideas and never finish them. Just get it out and get it done. I think that’s the best advice I can give.”

“When I got that phone call, when they said [Out There] got picked up, that was a scary moment. ‘Alright, it’s on, we gotta deliver!’ … But it’s good, I’m excited.” 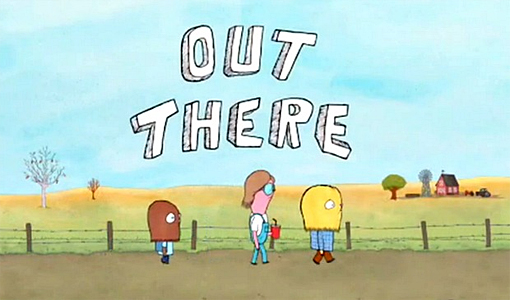 Out There premieres on IFC February 22 at 10:30 ET/PT. The show is produced by 20th Century Fox Television; Tony Gama-Lobo and Rebecca May are executive producers.