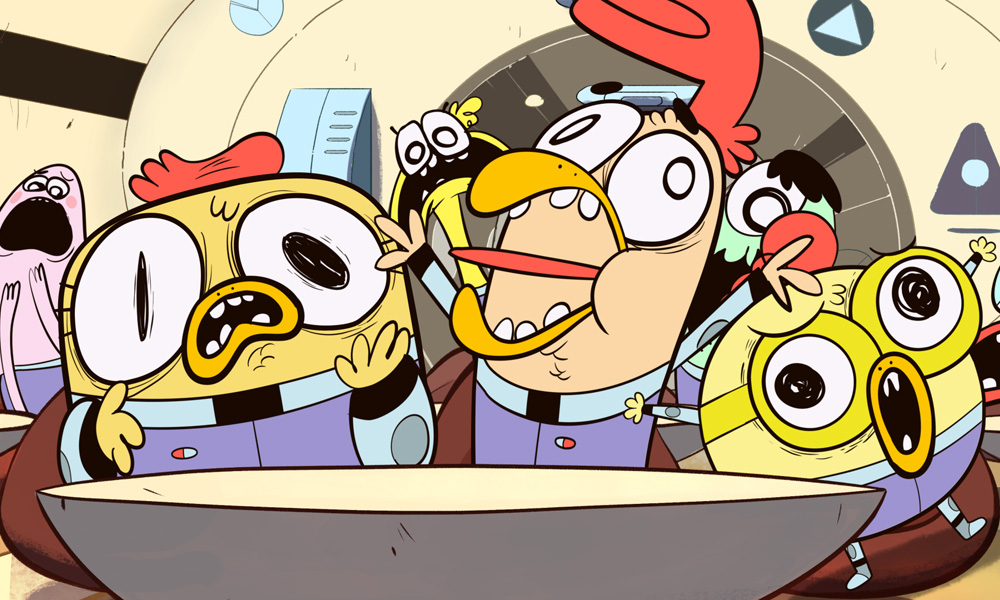 ***This article originally appeared in the September ‘18 issue of Animation Magazine (No. 283)***

Watch out, Foghorn Leghorn, Calimero and Chicken Little! There are a few new animated chickens in the yard! Produced byCAKE, Ánima Estudios, Studio Moshi and Dublin-based Gingerbread Animation for Disney EMEA and Channel 9 Australia, the new 52-part toon is called Space Chickens in Space, and has all the makings of a great sci-fi comedy.

Garcia de Letona tells us that he and Street originally wanted to tell a story about siblings living in fish-out-of-water situations, but “we swapped fish for chickens and Earth for space!” He says he was very lucky to get to know the talented Vad Flaatens, who brought their own zany visuals and imaginative take on the world to the show. “The twins have been our creative partners throughout the process and the show has been improved tenfold because of them,” he notes. “Special mention should also go to our distributor CAKE, Studio Moshi, Gingerbread Animation and Disney since the show would not have become a reality without their love and support.”

De Letona says the series is heavily inspired by their favorite sci-fi movies and TV shows. “We also had the opportunity to create a unique universe which at its core is about friendship and brother-sisterhood,” he notes. “We also have a school as our setting, which is a lot of fun to work with, and we hope our audience will really empathize with the characters. Even if it is set in outer space, the show still feels like home.”

Street is especially pleased that one of the show’s main characters is Starley, a feisty young girl chicken. “Starley was originally a boy until Disney had the foresight to recognize that we would need girls in the core cast of the show,” she points out. “Starley is fantastically unique — she’s got anger issues, she can pound entire planets into space dust, but she loves everyone and everything and just wants the entire universe to get along.”

The show’s pre- and post-production happens in Dublin, and the Toon Boom Harmony-based animation is produced in Australia. There are over 30 people in the Australian animation crew, but the whole series has a crew of over 75 people who cover all elements of design, storyboarding, editing etc, That doesn’t include the freelance scriptwriters, actors and other contributors — all of whom would bring the team number over a hundred.

According to the Ánima Estudios CEO, one of project’s main challenges was working with all the different production entities spread around the globe. “Our biggest challenge was to figure out how these very distant companies could work together, to build that pipeline from the microscopic level to the macro level,” says Garcia de Letona. “Our main goal was to do it all in a way that kept the values and ideas of the show intact.”

The Vad Flaaten brothers compare the production process to being involved in a long-distance relationship. “There is lots of Skype, Google Docs, Slack, emails and more Skype!!!” they say. “All the producers at the different studios are amazing at synching and spreading information: They’re doing a really impressive job.”

They also believe that the show’s antiheroes and sibling dynamics have universal appeal, something that goes beyond cultural and national definitions of humor. “We think weird, extreme expressions are universally funny and something we really try to push in Space Chickens so that the episodes will be interesting and memorable on a purely visual level,” note the twins, who have quite a global following thanks to their offbeat animated shorts and catchy songs.

“It’s a huge honor to have been able to develop and create humour with so many different people from across the world,” add the Vad Flaatens. “It’s been important to us that as many people along the way, from writers to ‘boarders to individual animators, get their little area of freedom to add humor — be it visual or timing-based or literal. Our hope is that this collective passion shines through.”

The brothers believe that the world needs more international partnerships like Space Chickens in Space. “We think more studios and execs should take a chance and invest in unconventional creative collaborations,” they says. “Space Chickens is the result of many different passionate artists shaping and having fun with the same idea. When people from different corners of the world come together and blend their ideas and inspire each other, beautiful, quirky and fresh stuff is made!”

Street is also quite optimistic about the state of TV animation all over the world. “I love that cartoons have once again become totally surreal,” says the veteran producer. “You don’t have to follow structural storytelling rules so much. Things don’t have to make sense. I think that’s what kids really want nowadays — to feel like they can really ‘own’ cartoons because they feel so random and out of control, which in a small way teaches kids to find joy in the randomness of their messy new-normal lives!”

You can learn more about Space Chickens in Space at the Cake Booth at MIPCOM. The show is slated to debut later this year. 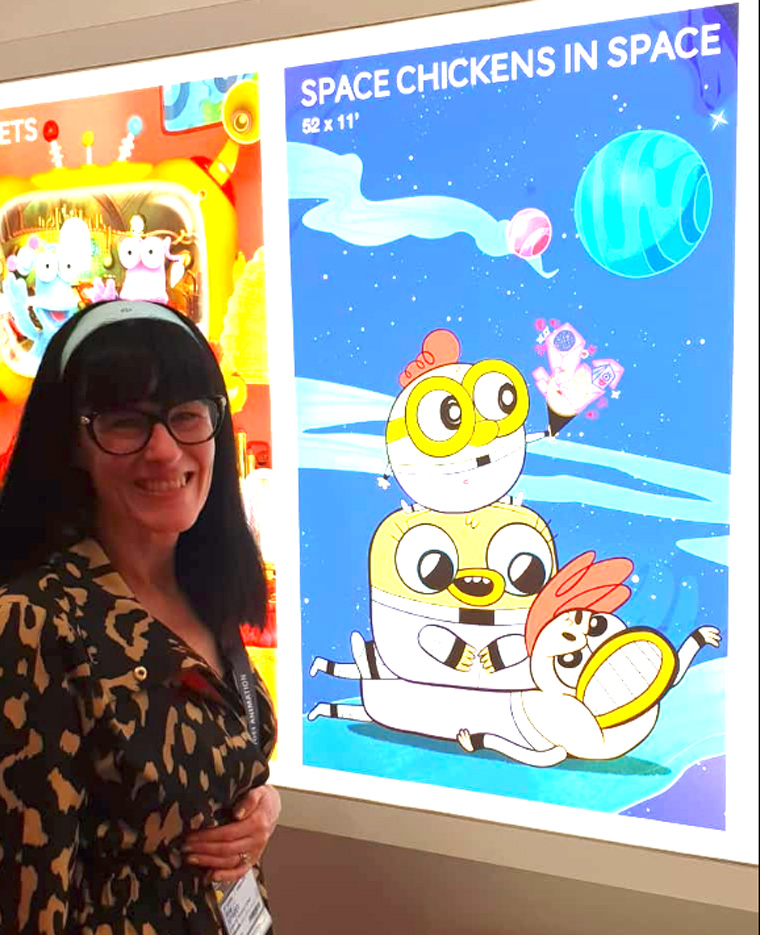