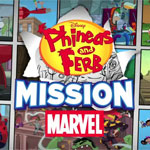 The episode finds Spider-Man, Iron Man, Thor and Hulk standing powerless after being struck by Dr. Doofenshmirtz’s power-draining “inator.” Once the Marvel Super Villains – Red Skull, Whiplash, Venom and M.O.D.O.K. – find out that Dr. Doofenshmirtz is responsible for robbing the Super Heroes of their powers, they seek him out and together create mayhem in Danville. Meanwhile, Phineas and Ferb do everything they can to restore the Super Heroes’ powers before the evil villains take over the world.

Here are some details about the multi-platform release:

Beginning Friday, July 26, fans can visit www.DisneyChannel.com/MissionMarvel to play an all new game featuring characters from “Phineas and Ferb” and Marvel. The site will also feature videos and a chance to create your own “Phineas and Ferb: Mission Marvel” Photo Mash Up.

Beginning Monday, August 12, Disney Channel will feature a weeklong strip of Phineas and Ferb episodes as a countdown to the special event of the summer. Additionally, Disney Channel SVOD and verified WATCH Disney Channel users will be treated to a first look.

On Sunday, August 25, at 10 a.m. the special will air on Disney XD and will be hosted by Dr. Doofenshmirtz via “Doof’s Daily Dirt.” The premiere event will feature six spots, including Dr. Doof dishing on his exploits with the Marvel Super Villains and encouraging viewers to visit www.DisneyXD.com to play an  all-new game inspired by “Phineas and Ferb: Mission Marvel.” 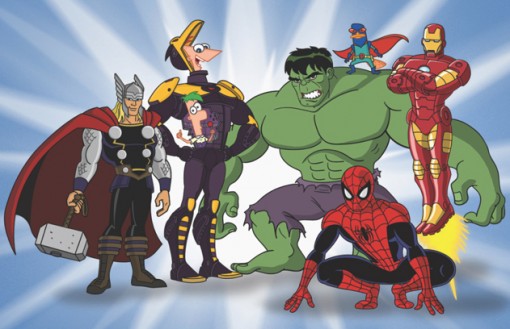