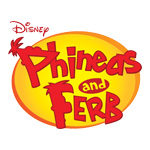 The creators of Disney Channel’s hit animated musical comedy toon Phineas and Ferb have another geek-tastic crossover special planned to follow up this summer’s Mission Marvel. Series honchos Dan Povenmire and Jeff “Swampy” Marsh announced at Comic-Con today that the daring stepbrothers and their pet platypus will be transported to the world of Star Wars in a galactic adventure set to premiere on Disney Channel and Disney XD next year.

“May The ‘Ferb’ Be With You and with all of us who for decades have dreamt of a chance to work with the great characters and stories of Star Wars,” Povenmire said during the reveal.

Set a long time ago in a galaxy far, far away, the episode finds Phineas and Ferb living on Tatooine just one moisture farm over from Luke Skywalker. Their happy life is interrupted when they are thrust into an outer space rebellion as the plans for blowing up the Death Star accidentally fall into their hands. They must search for a pilot to take them to the rebels—but complicating matters is Candace, on a Stormtrooper-ish mission to bust them in hopes of retrieving said plans.

Meanwhile, aboard the Death Star, Dr. Darth Enshmirtz (guess who!) has created a Force-powerd “Sith-inator” to use against the Rebel Alliance. Agent P, working undercover for the rebellion, is sent to stop him but quickly gets trapped in carbonite. Things then take a startling turn when Ferb is accidentally hit by a full blast of Sith-inator and becomes a servant of the Dark Side. 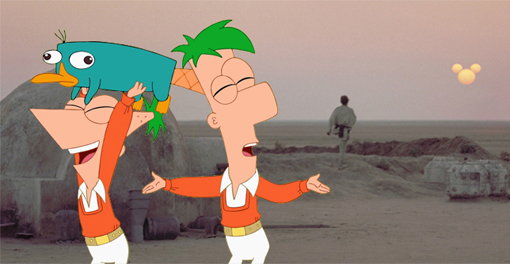 Phineas and Ferb Use the Force