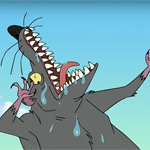 The awesome animated worlds of series creators/executive producers Dan Povenmire and Jeff “Swampy” Marsh will collide over the weekend as fan-favorite Phineas and Ferb villain Dr. Doofenshmirtz drops in on the season one finale of Milo Murphy’s Law this Saturday, September 30 at 8:30 a.m. ET on Disney XD! The special half-hour episode will offer a taste of what fans are in for when the official crossover adventure announced at San Diego Comic-Con debuts next year.

Ol’ Slouchy (voiced by Povenmire) will join the fray in “Fungus Among Us,” in which Milo (“Weird Al” Yankovic), Cavendish and Dakota (Marsh & Povenmire) travel back to 1965, inspire the creation of Dr. Zone, and encounter a sinister plot for world domination. Meanwhile, in the present, Zack (MeKai Curtis) and Melissa (Sabrina Carpenter) find that everyone they know is behaving very strangely, and uncover a dangerous new threat springing up among them…

The highly anticipated crossover, slated for 2018, has been plotted by Povenmire and Marsh since the beginning of Milo Murphy’s Law, with Easter eggs hidden throughout the first season hinting that Milo and co. live in Danville, just a few neighborhoods away from Phineas and Ferb. P&F (voiced by Vincent Martella & Thomas Sangster) are set to appear, as well as Doofenshmirtz and his nemesis Perry the Platypus (“voiced” by Dee Bradley Baker), Candace( Ashley Tisdale), Isabella (Alyson Stoner), Baljeet (Maulik Pancholy) and Buford (Bobby Gaylor).