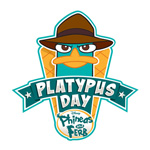 Groundhogs are sooooo last millennium, guys. The coolest mammal on the block is the platypus, as evidenced by the popularity of Disney’s Phineas and Ferb and its secret agent animal, Perry. The celebrations have begun with the release of the “O.W.C.A.” disco anthem (inspired by “Y.M.C.A.”) on Disney Channel, XD and Radio Disney. The O.W.C.A. (Organization Without a Cool Acronym) song rollout includes two music videos featuring Disney stars from popular live-action programs. You can catch the Disney XD premiere of the videos Monday, Feb. 18 at 8 p.m.

The fun fete in honor of the O.W.C.A.’s most popular secret agent, Perry, will continue on Saturday, March 2—National Platypus Day—with a “multi-platy-form” celebration that includes two new Perry-centric episodes that will introduce a new O.W.C.A. agent from Canada and a formidable foe from down under. Disney Channel will premiere new episode “Sidetracked” on Friday, March 1 at 9 p.m. and present multiple episodes Sat., March 2. Disney XD’s five-hour Phineas and Ferb marathon kicks off with new episode “Primal Perry” on Sat., March 2 at 8 a.m. Additionally, five animal agents-themed episodes and a “O.W.C.A.” music video will be available on iTunes on Friday, February 15.

Dan Povenmire and Jeff “Swampy” Marsh (creators/executive producers and the voices of Dr. Doofenshmirtz and Major Monogram) will also co-host a Top 30 Countdown on Saturday, February 23 and Sunday, February 24 and join Radio Disney’s Ernie D in studio for a “Take Over” on Friday, March 1. The fun goes online beginning Friday, February 22, when fans are invited to visit www.DisneyChannel.com/platypus and www.DisneyXD.com/platypus to watch short “How to Draw Perry” videos depicting their favorite Disney stars, and draw and upload their very own Perry creations.  In addition, a new online game, “Agent P: Return of the Platypus” will launch.  A special “Doof’s Daily Dirt” video with Doof griping about his evil nemesis getting a day dedicated to him, will also be released timed to Platypus Day.

And should you have to leave the house while all this platy-partying is going on, just stop by a Subway restaurant between now and April 14 for a Fresh Fit for Kids Meal and get one of six reusable show-themed bags (featuring Phineas, Ferb, Perry, Candace or Dr. Doofenshmirtz) plus a download code for a Phineas and Ferb episode, app or song. 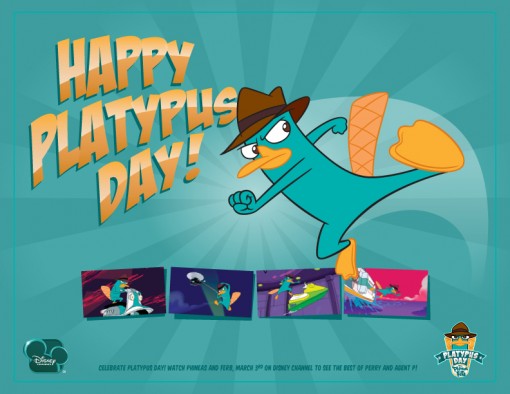