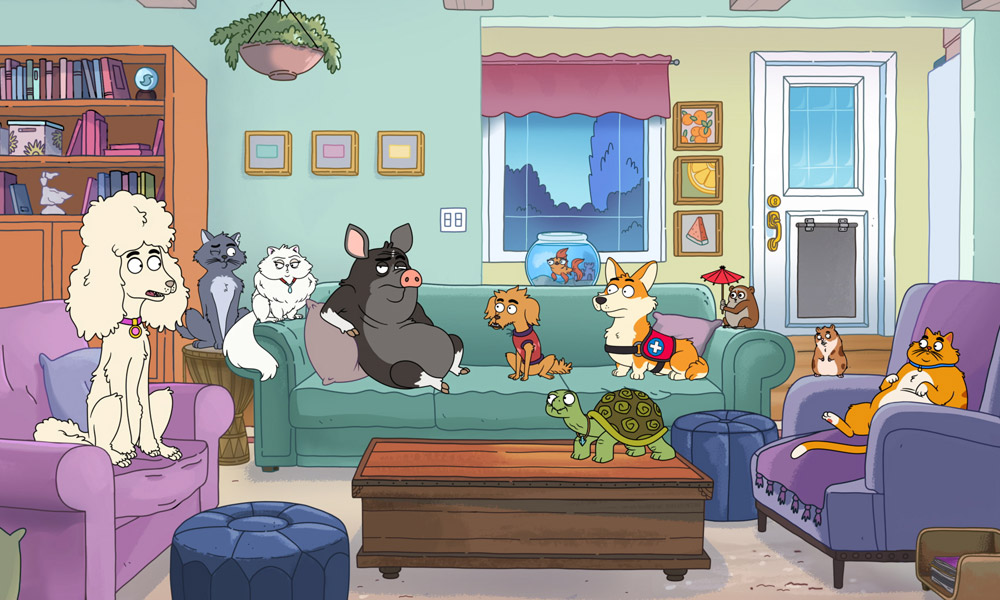 If you enjoy Fox’s latest primetime animated series HouseBroken, you need to thank exec producer and co-creator Clea DuVall’s very hard-to-please pet cat. As she explained during a summer press event, “I have a cat who I have a very complicated relationship with, who just seems permanently dissatisfied, and I wanted more than anything to be able to go to a counselor together [and figure out how] I could finally make her happy. Then, I just started thinking that would just be such a great idea for a show, getting at what animals’ interior lives are really like.”

Fortunately, DuVall talked about her show idea with exec producers/co-creators Gabrielle Allan (Veep, Scrubs) and Jennifer Crittenden (Everybody Loves Raymond, Seinfeld, The Simpsons) after a table read when the three were working on HBO comedy Veep. “Jen and I are both pet lovers and pet owners, so we thought centering a show on animals in group therapy would be a great idea,” says Allan. “We also love therapy, and thought it would be a good way to tackle human issues in a fun and palatable way for everyone.” 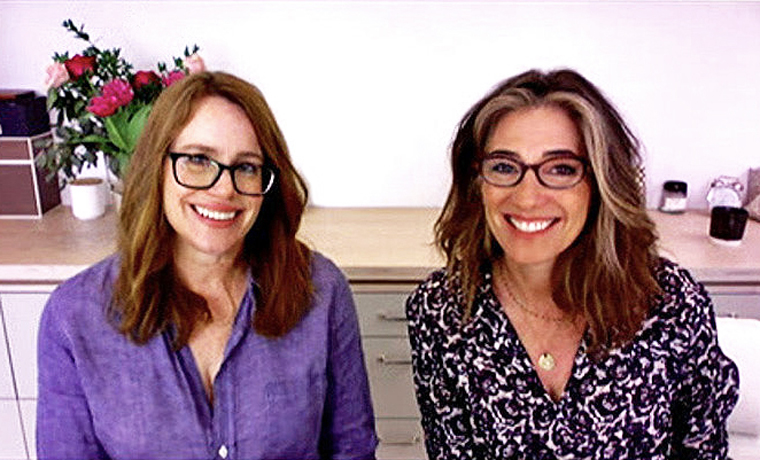 A Poodle in Her Prime

The result of their collaboration is a new animated series which centers on Honey (Lisa Kudrow), a standard poodle who runs group therapy sessions to help animals from her neighborhood manage neuroses brought on by their owners and each other. The show’s super hip voice cast includes Nat Faxon as a sloppy St. Bernard, Will Forte as a sex-positive tortoise, Sharon Horgan as an aging Persian cat, Jason Mantzoukas as a street-smart cat, Sam Richardson as a co-dependent cat, Tony Hale as a sweater-wearing terrier with OCD, and DuVall as a know-it-all corgi.

“We had so many ideas for the show, so we had to trim it down for our pilot,” says Crittenden. “But we added the animals as we went along. We have a wild raccoon (Ken Simon) that comes in and joins in the group. There’s even a sinister parrot who hates Honey.” 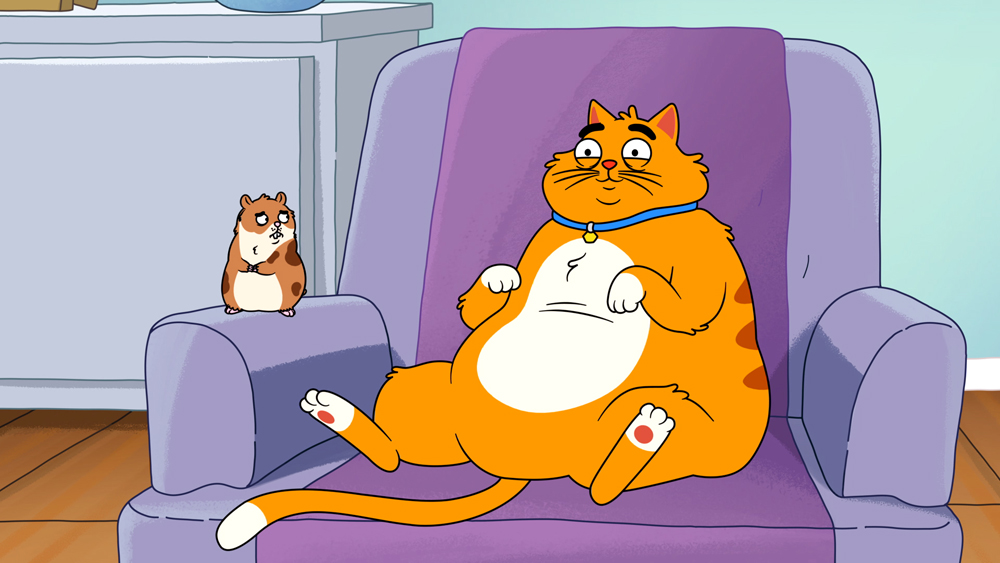 The showrunners pitched the idea to Fox back in 2018, and they put together a team of 10 writers to work on the show in the February of 2020. “We all got to meet each other and work for a month at the studio, and then, after that, we all took it to Zoom because of COVID,” notes Crittenden. “Back then everything was so weird and scary in the outside world that our work was a safe place for all of us, where we could go and laugh and keep our jobs.”

It took them about 18 months to lock in the first episode. “We all learned to be very nimble due to the pandemic and it wasn’t always as smooth,” recalls Crittenden. “I worked on The Simpsons for two seasons, but that was mainly the writing. We didn’t deal with the post-production work. I learned a lot on this show. Joel [Kuwahara], our exec producer at Bento Box, has guided and mentored us throughout the whole process, and we’ve learned a lot about all the details of putting together an animated show.” Saerom Animation in Seoul and Synergy Animation in Shanghai worked on the animation as well as Bento Box.

Allan also points out that she and Crittenden were amazed at the caliber of talent they were able to attract for their show. “The people we got are so good at it, and they all seem to be really enjoying it too,” she notes. “You could never get all of them in a live-action show, it’s because this is an animated show and our schedule is very flexible for the actors.”

Crittenden says she is very proud of what her writing staff was able to do this first season. “One of the great things about working in animation is that you can keep rewriting and making the jokes better, add more twists to the storyline, and our writers were able to elevate the episode every time they did a rewrite. I was so happy to work with such great writers. We were also blessed with amazing directors who were hugely collaborative and each had their own special take on the show.” 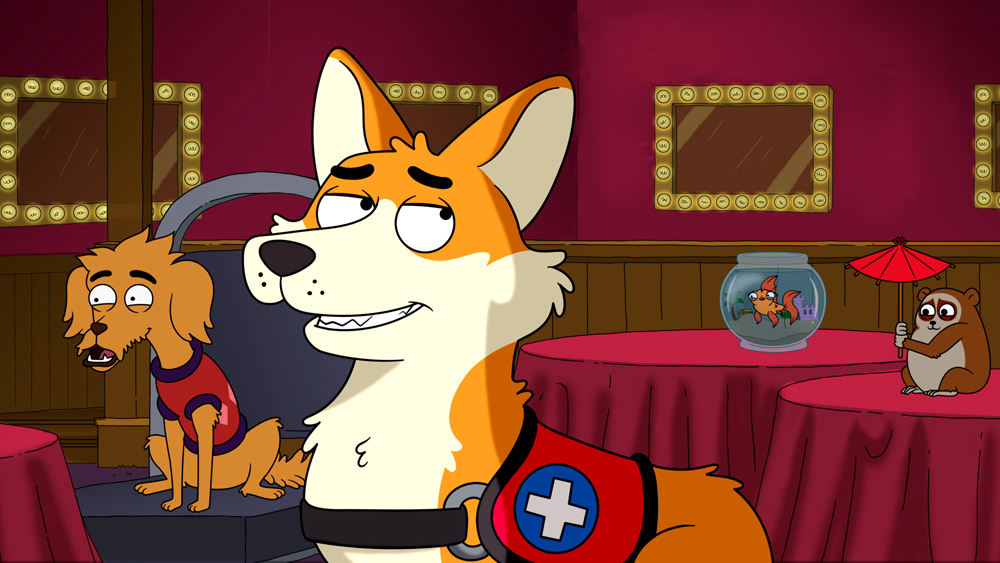 Adds Allan, “Yes, I’m proud of them, too. I am also very happy that we were able to find a nice spot between including silly fun and animal humor as well as the therapeutic and psychological aspects of the characters. We were able to walk that line and explore the issues that were projected on these animals. But, we also love a great fart joke. Hopefully, we found a great balance there. Plus, we think the show also has heart.”

The showrunners also praise the work of supervising director Mark Kirkland, a three-time Emmy-winning veteran of The Simpsons. “Mark brought such a great aesthetic to the show,” says Crittenden. “Although the visuals are unique, they are a little familiar and they’re not shockingly weird. We love the way our show looks. The characters are instantly funny, and they owe a lot to the great animators, designers and directors.” The series’ directors are Amber Hollinger, Mike Morris, Jackson Turcotte, Jake Hollander and Eric Koenig. 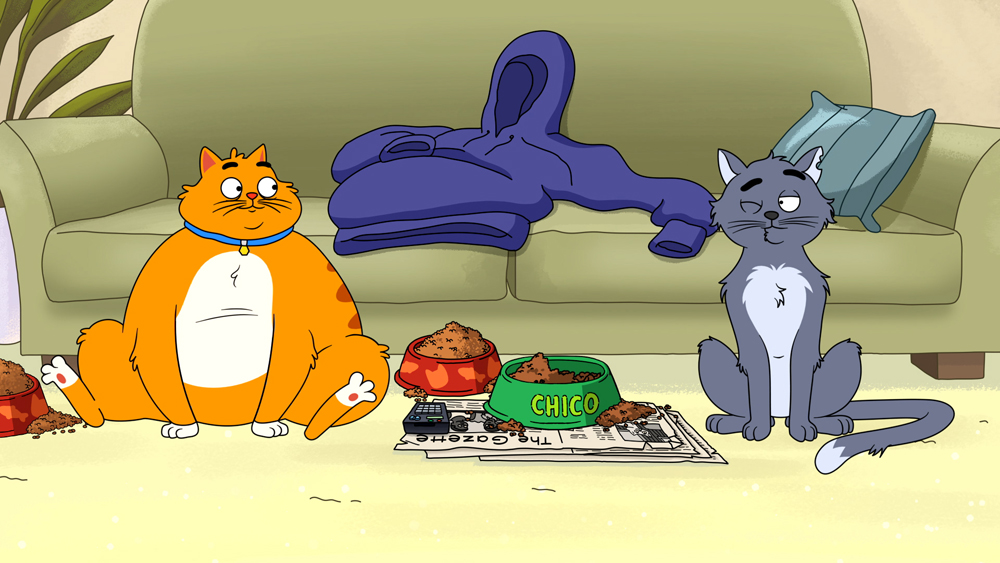 Pets That Can Land Jokes

Allan admits that the show’s tight schedule could be challenging at times. “When you work on a live-action show, if you don’t have the shot, you work with what you have. But in an animated show, you can always go back and do it over again. So, in a way, it becomes more challenging. The production never ends. For live action, you work six grueling months and then you get some time off, but on this show, we worked 18 straight months with no breaks. But, it gets easier and easier the more episodes you do. Also, animating animals and making sure they can land jokes with the right expressions is more difficult than animating people. I think we found it, but it took a little while.”

When asked about animation influences, Crittenden mentions The Simpsons and the classic Rankin/Bass Christmas specials, while Allan also points to the Saturday morning cartoons of her childhood such as Super Friends and Scooby-Doo cartoons as all-time favorites. “They used to be my babysitters when the rest of the family was asleep on Saturday mornings,” she recalls.

As they get ready to see how fans react to their neurotic pets, the talented duo have high hopes for the future. “I hope audiences will relate to the animals as well as pet owners. I mean we tackle topics like aging and intimacy issues. We have human issues and pet issues,” says Allan.

Crittenden adds, “I just hope people laugh at all the stuff we always think about our pets, and I hope they’ll connect with these characters.”

HouseBroken premieres on Monday, May 31, new episodes debut Mondays at 9 p.m. on Fox.