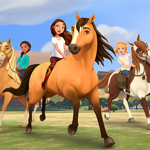 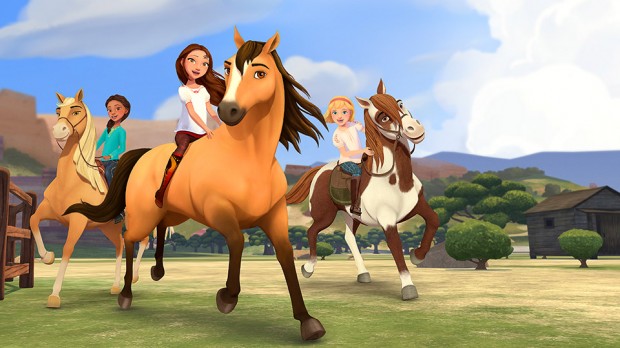 The show runners behind DreamWorks’ new Spirit Riding Free series for Netflix bring a widescreen, Western look to new toon adventures for a girl and her horse.

There’s no denying that meaningful bonds can be formed in an instant — love at first sight, a horse  perfectly matched with its rider, or an artist bringing to life a story they’ve long dreamed of creating.

The latter two are particularly apropos in the case of Spirit Riding Free, DreamWorks Animation Television’s new series based on the studio’s 2002 feature Spirit: Stallion of the Cimarron, and its show runners, Aury Wallington and Jim Schumann.

“My whole life, I’ve been obsessed with horse stories,” says Wallington, who launched her TV writing career as a script coordinator on HBO’s Sex and the City. “I certainly loved the shows that I grew up with, which were more of the Mork & Mindy, Facts of Life sort of things, but I always dreamed about having a show that  encompassed those stories from the books that I loved so much about adventure and freedom.”

That opportunity finally came to pass for Wallington, who’s written for shows such as Heroes and Gravity Falls, when a series based on Spirit was on the table during a meeting with DreamWorks Animation Television.

“It instantly caught me because the thought of having a chance to tell that story, to make the show that 9-year-old me would have gone bananas over, was really irresistible,” says Wallington.

The writing appealed to veteran animation writer, director and producer Jim Schumann, who was working with DreamWorks Animation TV on a project that didn’t come together when he read Wallington’s pilot script. “It’s the reason I took the gig,” he says. “I could see it. I knew what it was going to look like. The characters were genuine. The story was genuine. It was exciting.”

Arriving with six episodes May 5 on Netflix, Spirit Riding Free tells the tale of a gutsy 12-year-old girl named Lucky, who meets a resilient mustang named Spirit — the offspring of the feature film version — when her family settles out west in the 1890s. With her two new best friends — and their horses — by her side, Lucky explores a new world of freedom and adventure.

Following its Own Path

Wallington’s vision for the show was unusual for animation in several ways. The horses, for example, are not anthropomorphized either in their actions or via narration, as the film did. There also are no magical or fantasy elements, and the stories and characters are grounded in a very realistic and genuine way.

This gave Schumann and the show’s crew the chance to experiment with unusual looks and techniques.

“Me and (art director) Ellen Jin were influenced by stuff that was coming out of Europe, like the Netherlands,” he says. “We wanted the show to be big. We wanted to shoot it like a western, big and wide, and use the frame.”

That ambition was not lost on the crew, which rose to the unusual challenges Spirit Riding Free presented.

“When we started, we knew it was going to be a tough show, but everybody on this show has bought in to what we’re trying to accomplish,” says Schumann. “There’s a level of commitment to this show that I haven’t experienced a lot in other shows. On a lot of other shows, it’s just a gig, but here everybody is just so committed because we kind of know we’re doing something special.”

For the lighting, Schumann turned the standard approach for TV a little to the right. “Most CG shows have what’s called 12 noon lighting, where everything is above the head, and  then there’s supplementary lighting,” he says. “We put our our lighting at 2 o’clock, sort of like late afternoon so we get some really nice shadows.”

The look also lead to a shading style and a cinematic look. “It’s not like a classic toon shading, but more of a hybrid,” says Schumann. “We also used a lot of 2D elements in the artwork and on the sets and stuff, so it gives us a really striking look to the show.”

The look also is designed to play to the strengths of the writing. “It’s set in 1890, but we didn’t want the period details to in any way weigh the show down or stand as a barrier that would make it less accessible to the audience,” says Wallington. “So we’re trying to do a contemporary show in a historical setting and the look of the show helps give us this flavor of the period, the Old West, with the long shadows, the faded-out color in certain places and the vibrant colors in other places.”

As for the animation, which is being done by Technicolor in India, horses are a real challenge to get right. Schumann says they pulled a lot of reference from the Spirit feature as well as other reference on how horses walk, gallop and run. The goal was to ensure the horses’ personalities came through without doing anything that looks unreal or takes the audience out of the realistic elements.

Wallington says it’s been fun to write for animation, which required a bit of a learning curve to understand what could and couldn’t be done easily in CG.

“It didn’t feel different from writing live-action: this is the story I wanted to tell,” she says. “I’ve been lucky in having Jim and the rest of the team, who are so on the ball.”

Both are extremely proud of the results and anxious to see how the show is received. “We probably wouldn’t have been able to make this show at any other studio,” says Schumann. “It’s been a really great experience.”