PBS has announced it will launch new, 24/7 children’s services later this year which will include a new TV channel and live stream on digital platforms, provided by local stations. Now PBS stations across the country will be able to broadcast PBS KIDS shows at all hours, making it easy for children to catch their favorite shows. The station-branded live streams will also be accessible through pbskids.org and on the PBS KIDS Video App — available for mobile, tablet and OTT devices.

“Parents know that PBS KIDS makes a difference in their children’s lives, which is why so many have said they would value having access to our content throughout the day. Television continues to be the most widely used platform for children’s educational content, especially among low-income families,” said PBS President and CEO Paula Kerger. “The new PBS KIDS 24/7 channel and live stream offered by local member stations ensure that educational media is available to all families, all the time and via a platform that works for them. Given that 54% of all children nationwide do not have the opportunity to attend preschool, providing access is a critical element of our public service mission.”

Following the initial launch, the live stream will be enhanced with an integrated games feature, which will allow young viewers to toggle between watching a show and a tie-in activity that extends learning.

The new PBS KIDS 24/7 channel will offer popular favorites such as Daniel Tiger’s Neighborhood, Odd Squad, Wild Kratts and Dinosaur Train, new series Nature Cat and Ready Jet Go!, and a new show from The Jim Henson Company, working titled Splash, premiering this fall. The 24/7 channel will be in addition to established local PBS channels, which will continue to offer daytime PBS KIDS programming. The channels will have different program lineups, expanding viewing options for families. 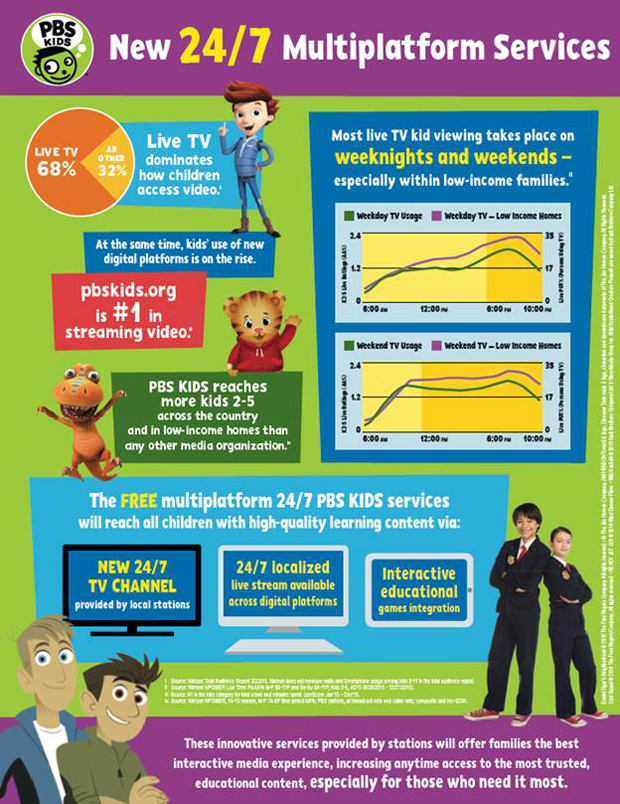