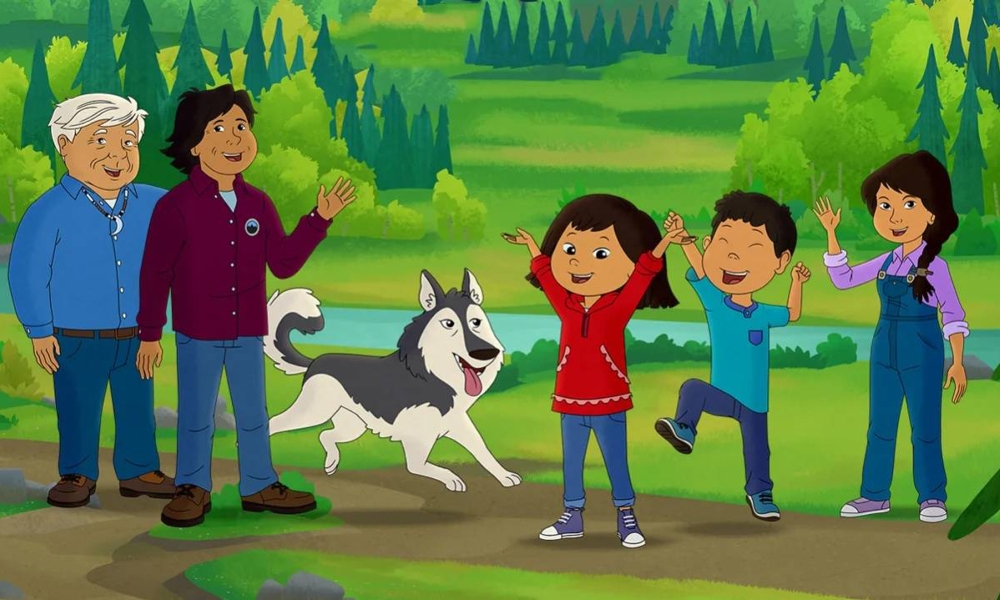 PBS KIDS and GBH Boston today announced that the award-winning animated series Molly of Denali will return for a second season in Fall 2021. The show is produced with GBH’s animation partner, Atomic Cartoons (part of Thunderbird Entertainment).

Following its premiere in 2019, Molly of Denali received critical acclaim, including a Peabody Award, a Television Critics Association Award and a Kidscreen Award. In its first year, the groundbreaking series reached more than 42 million people on-air on PBS KIDS, and the PBS KIDS digital platforms have over 450K users each month.

“It is gratifying to see how kids, families and educators have embraced Molly of Denali,” said GBH President & CEO Jon Abbott. “GBH is grateful to be a partner with PBS KIDS and our Alaska Native collaborators as we continue to create important content and opportunities that support children’s development and feature the experiences and contributions of all Americans.”

Molly of Denali follows the adventures of curious and resourceful 10-year-old Molly Mabray, an Alaska Native girl who lives in the fictional village of Qyah, Alaska. It is the first nationally distributed children’s program to feature Native American and Alaska Native lead characters, and incorporates Alaska Native voices in all aspects of the production, both on screen and behind the scenes.

“In Molly of Denali, we are sharing the rich wisdom of elders before us, passing along over 10,000 years of scientific, environmental and social-emotional knowledge,” says Creative Producer, Yatibaey Evans. “The series is an opportunity for Alaska Native people to tell the world about our ways of life that will help preserve our collective future.“

The 2D-animated series is grounded in a pioneering curriculum focused on informational text (IT), a foundational aspect of literacy education. Recent studies by Education Development Center and SRI International found that resources from the series improved children’s ability to use IT to solve real-world problems. After only nine weeks of access, this impact is equivalent to the difference in reading skills a first-grader typically develops over three months.

Season 2 will include a one-hour special and 23 half-hour episodes, comprising two 11-minute stories and a live-action interstitial, which will feature Alaska’s natural wonders, rich and diverse Alaska Native cultures, and the importance of community – with the humor and adventurous spirit that marked Season 1. Native languages will continue to be present in all stories, including episodes like “Uqiquq (Throw Party),” where Tooey writes and delivers a speech to his Grandmother in their native language. “Molly and Elizabeth” features the story of Elizabeth Peratrovich, an Alaska Native person who led the creation of the nation’s first state or territorial anti-discrimination law in 1945. In the episode, she inspires Molly to stand up to a group of tourists who make stereotypical assumptions about Alaska Native people.

“This season offers more groundbreaking episodes that uplift Alaska Native values and cultures and celebrates the importance of community and the natural world,” said series Executive Producer Dorothea Gillim. “Audiences will love all the great new content, including animated and live action shorts as well as a suite of digital games.”

“PBS KIDS is proud to bring kids and families nationwide a second season of Molly of Denali,” added Lesli Rotenberg, Chief Programming Executive & General Manager of Children’s Media and Education at PBS. “Representation and inclusion are critical to our work, and we’re thrilled to continue building on that mission through this groundbreaking series, which also teaches critical literacy skills.”

The new season will also bring new digital games, available on pbskids.org and on the PBS KIDS Games App, as well as new educational resources on PBS LearningMedia. The latest season of the Molly of Denali Podcast can be found on pbskids.org/molly/podcast or anywhere you listen to podcasts.

Support for Molly of Denali is provided by the W.K. Kellogg Foundation, The Arthur Vining Davis Foundations, and by public television viewers. Additional funding made possible with the participation of the Province of British Columbia Production Services Tax Credit. Corporate funding is provided by Target.