Even though Sesame Street has shuffled off to HBO, the relationship between PBS KIDS and The Jim Henson Company is still going swimmingly. At its annual member station meeting, the pubcaster dated the premiere of its newest show Splash and Bubbles — a CG animated series from JHC and Herschend Enterprises (Dollywood, Harlem Globetrotters).

Splash and Bubbles will premiere Wednesday, November 23, 2016 on PBS stations nationwide. Digital content related to the show — including games, apps and parent and educator resources — will be available beginning this fall.

Created by John Tartaglia (ImaginOcean, Johnny and the Sprites), Splash and Bubbles uses groundbreaking digital puppetry animation and encourages kids ages 4-7 to explore the natural undersea world along with the titular fish characters. Developed with an advisory panel of top marine biologists, digital innovators and educators, the adventures are grounded in a marine biology curriculum focused on diversity, individuality, interconnectedness and the joy of discovery. Splash and Bubbles also introduces young viewers to the concepts of ecological balance and ocean conservancy.

The series follows Splash, a yellow fusilier fish who has migrated all over the ocean before settling in Reeftown, where he befriends Bubbles, a Mandarin dragonet whose vivid markings match her colorful personality. Until Splash came along, Bubbles and the denizens of Reeftown had no idea what lay beyond their coral home, but all that changes as the duo explores the sea to make new friends and learn about the many forms of life inhabiting the ocean.

Splash and Bubbles is partly funded by the Corporation for Public Broadcasting and is executive produced by Lisa Henson and Halle Stanford of The Jim Henson Company, Julie Phillips and Merrill Puckett-Miller of Herschend Enterprises, as well as John Tartaglia, Michael Shawn Lewis and Jill Shinderman. Tom Keniston is producer and David Skelly is supervising director. The Jim Henson Company oversees all distribution and merchandising for the property and Herschend Enterprises administers all themed entertainment rights. 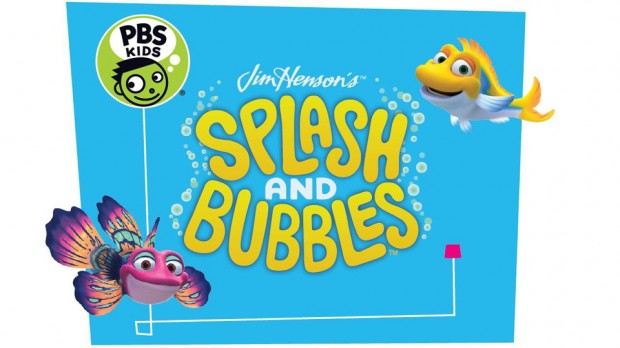