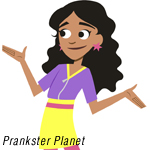 The Electric Company is adding an animated math-literacy segment called Prankster Planet, set to debut with the third season premiere of the Emmy-winning show May 2 on PBS Kids Go!

Twelve two-minute animated segments have been produced and are part of an overal “transmedia” experience in which story elements in multiple media will each make a unique contribution to the overall story.

Produced by Sesame Workshop, the animated segments feature Electric Company members Jessica and Marcus as comic book heroes in a 12-part animated adventure in which their mission is to get to Prankster Planet ASAP and stop the pranksters from stealing all the words from Earth. The TV segments will end with the characters directing viewers online, where the story continues in 12 multilevel online quests, 60 minigames, an avatar creator, a rewards system to encourage repeat play and a magazine. And coming in early summer, there also will be a progress tracker online for parents and teachers to follow kids’ learning online.

“Bringing the characters into an action adventure story and gaming world that invites kids to participate is a natural progression of The Electric Company,” says Karen Fowler, executive producer and VP. “Watching children quickly take to this new section proves that we need to keep challenging ourselves to push the boundaries of media and education to serve the needs of kids in a way that reflects the world they live in.”

The Lost Guide to Prankster Planet magazine completes the learning experience by extending the math concepts and vocabulary featured online and in the animated TV segments. The magazine, distributed to PBS and other Electric Company partners, will contain secret Prankster Planet information that the reader can use to collect hidden words and save the world from becoming wordless!

The Adventures of The Electric Company on Prankster Planet will air at the end of Electric Company episodes everyday starting May 2. The online adventure will go live that same day at PBSKIDSGO.org/electriccompany.