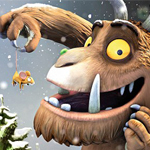 The acclaimed animated half-hour special The Gruffalo will make its U.S. debut on ABC Family on Thursday, December 9, at 7 p.m. as part of the network’s annual 25 Days of Christmas programming event. Based on Julia Donaldson and Axel Scheffler’s best selling children’s picture book, The Gruffalo features an all-star voice cast including Robbie Coltrane as the Gruffalo, Helena Bonham Carter as the narrator, Rob Brydon as the Snake, James Corden as the Mouse, John Hurt as the Owl, and Tom Wilkinson as the Fox.

The Gruffalo tells the charming tale of a mouse who takes a walk though the woods in search of a nut. Encountering three predators—all of whom wish to eat him—the plucky mouse has to use his wits to survive. He announces that he is meeting a monster with terrible features, a ‘Gruffalo’, and the three predators are each panicked into running away.

Produced by Magic Light Pictures, the 30-minute animation was completed in 2009 and premiered in the UK on BBC1 on Christmas Day receiving 10 million viewers and 42.6% share of the total audience; one of the highest rated programs of the year. Axel Scheffler’s artwork is brought to life with a unique mixture of model and CGI animation. Michael Rose (Wallace & Gromit, Chicken Run) and Martin Pope (The Heart of Me, Lawless Heart) have produced through Magic Light Pictures. The film is directed by Jakob Schuh and Max Lang and was animated at the award winning Studio Soi in Ludwigsburg, Germany. Sold and broadcast internationally, The Gruffalo was nominated for a BAFTA and has won numerous awards including the Prix Jeunesse and the Crystal for Best TV Special at Annecy Animation Festival.

Check out the trailer here:

You may also like...
Related Topics:ABC Family, Oscars, Premiere, The Gruffalo