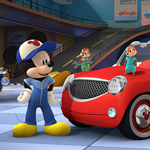 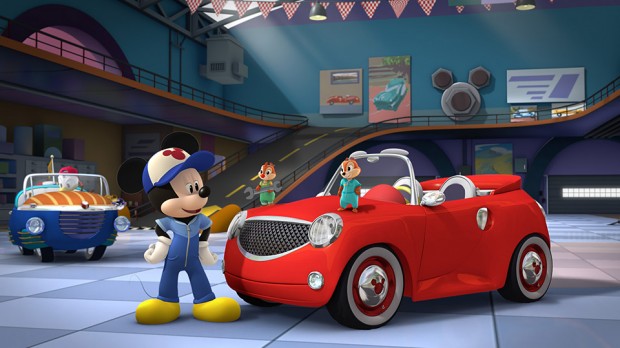 Disney Junior refreshes Mickey and pals for a new generation of young viewers with a classic-car premise in Mickey and the Roadster Racers.

No word better describes the American icon Mickey Mouse than “classic,” and nothing defines classic Americana better than car culture — making the merger of the two in the new preschool animated series Mickey and the Roadster Racers something of a perfect match.

“We love cars and car shows and are big fans of Big Daddy Roth and that kind of thing,” says Mark Seidenberg, co-executive producer and supervising story editor on the new series, produced by Disney Television Animation and due to premiere Jan. 15 on Disney Junior. “And we through this would be putting two loves of ours together: cars and Mickey.”

That pitch from Seidenberg and executive producer Rob LaDuca — both previously of Jake and the Never-Land Pirates and Mickey Mouse Clubhouse — earned a go-ahead from executive VP of original programming Nancy Kanter, and they were off to the races. Supplementing the decision was the popularity of  an episode of Mickey Mouse Clubhouse titled “Mickey’s Clubhouse Road Rally” and featured the characters racing cars. “It turned out to be one of the best selling DVDs for Disney,” says LaDuca. 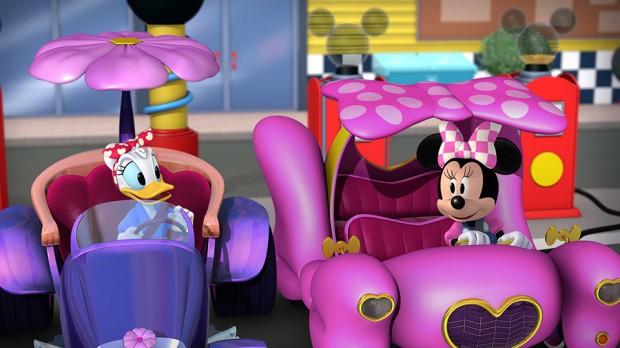 The 52 x 11 series — airing as 26 half-hours — focuses on the adventures of Mickey, Minnie Mouse, Goofy, Donald Duck, Daisy Duck and Pluto in the town of Hot Dog Hills. Mickey runs a garage and all the characters have cars that transform into roadster racers that reflect their personalities — a concept that was a lot of fun to develop, LaDuca says.

“Mickey has a classic hot rod, like they used to make from Model T’s — very American,” he says. “Minnie’s car, she’s a bit more elegant and maybe a bit more international, so we designed her car, it looks like a bow, but it came from the design of a French car from the ’30s, called a Delahaye.”

“And then for Goofy’s car, we were inspired very much by Big Daddy Roth, so we thought, what’s better for Goofy than a bathtub on wheels with a working shower head?” adds Seidenberg.

“And then Donald, because he’s a sailor, we gave him a boat on wheels: the Cabin Cruiser,” says LaDuca. “And then Daisy loves flowers, so we wanted a smoking dragster for her, so we call that one Snapdragon.”

Researching these designs lead the producers directly to the renowned car collection of former Tonight Show host Jay Leno, who personally toured them around his garage.

“By the end of the tour, we said we have a character we’re developing called Billy Beagle who’s like the race announcer,” says LaDuca. “And he did a voice, he goes, ‘Would he sound like this?’ And we said, you’re hired!”

Telling tales of race after race, however, would quickly get repetitive, so the approach to storytelling draws heavily on the iconic stars of the show. “They’re the dream team,” says LaDuca. “They come directly from Walt, and we have a big responsibility to keep them as their characters.”

Seidenberg says the stories are always about the characters. “Sometimes there is a race, but a lot of times it’s just the old kind of gang comedy where everybody decides, hey, let’s go fishing today,” he says. “Or maybe there’s a problem at the garage, and Donald’s put in charge of the garage one day when Mickey can’t do it and of course Donald turns out to be a horrible boss and everybody quits, or they want to quit.”

The core cast’s unique characters informed every aspect of the show. “The beauty of it is, we can put the characters in any situation,” says Seidenberg. “With the idea that Goofy would be a mechanic on his own car, he’d have Goofy tools. … Mickey, because he’s such a gung-ho little guy, he’s the official test driver, and Daisy runs the makeover salon where she does pin-striping and painting of all the cars.” 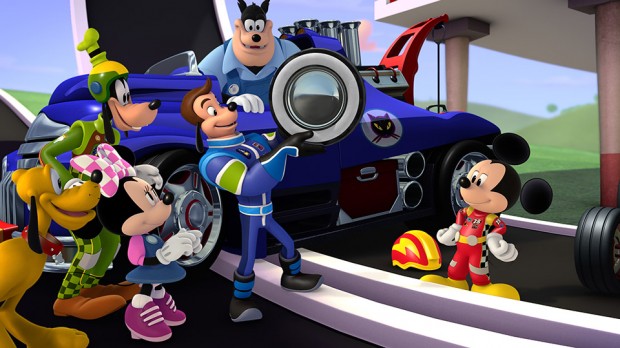 Produced in CG, the show still evokes a classic cartoon look while also filling out the world the characters live in more than Clubhouse did. “We really wanted to them to live in a city, so Hot Dog Hills was developed,” says Seidenberg. “Everything’s skewed a little bit cartoony. We didn’t want to get too cartoony, like Toon Town, but there really aren’t any straight lines either.”

Stories take the characters out of Hot Dog Hills and around the world to some famous cities that got a subtle cartoon makeover. “We will be going to London, Rome, Madrid — and we’re very careful to not make fun of the national icons like the Eiffel Tower or the Colosseum,” says Seidenberg.

The main setting is the garage, which was inspired by the visit to Leno’s garage and is decorated with racing car posters, trophies and advertisements. Other key settings include the Hot Dog Diner and a freeway whose exits form the familiar outline of Mickey’s head when seen above.

With animation done by Technicolor, writing of the series is overall script-driven due to scheduling demands. “But then we don’t pull back on the board guys if they want to have fun with a gag,” says LaDuca.

“When we’re going along with a race, we have five or six characters with cars, and the choreography of figuring out who’s in first second third at any point — that’s probably the biggest challenge we have,” says Seidenberg.

In addition to Leno, Mickey’s Roadster Racers has pulled in some other famous faces and voices. Three NASCAR drivers lend their voices and their likenesses to Disney-fied versions of themselves: Jimmie Johnson plays Jiminy Johnson, Danica Patrick is Danni Sue, and Jeff Gordon plays Gordon Gear.

“All three of them were having a ball, especially when they saw what they were going to look like on screen,” says Seidenberg. “They really put a lot of energy into their performance.”

“But basically everybody is having fun: board guys, background designers — it’s been a really smooth production,” says LaDuca.