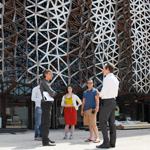 How the French government is bolstering international animated co-productions, plus a whirlwind tour of top toon houses.

As a country renowned for its artistic temperament, fans of French animation are used to marveling at the work of toon auteurs like Sylvain Chomet, Bibo Bergeron, Michel Ocelot or turn-of-the-century effects pioneer Georges Méliès. But new pushes from the government geared toward making the country’s commercial animation and vfx sectors more competitive are quickly broadening outsider perceptions.

One important weapon in the arsenal is the Tax Rebate for International Production, or “TRIP.” Organized by the Film France national commission, TRIP supports foreign companies producing (either partly or in full) film or television projects in France. Eligible productions may receive a 20 percent rebate—up to 4 million euros or about $5.6 million U.S.—to offset costs. Universal and Illumination were the first U.S. producers to take advantage of the more recently established guidelines for animation with 2010’s Despicable Me, which was animated by Paris-based Mac Guff Ligne. TRIP will also be utilized for Universal’s upcoming releases The Lorax (2012) and Despicable Me 2 (2013).

Another direction being pursued is the active development of industry infrastructure being spearheaded by regional governments. Provence, in particular, which is home to acclaimed animation school Supinfocom in Arles, sees the promise of building up its film and technology sectors—including animation, visual effects, software development and new media. Provence Promotion, the economic development agency of the Bouches-du-Rhône, offers support, advice and information for start-ups as well as established companies both domestic and international looking to set up shop in the area. In addition to the high quality talent pool coming from Supinfocom and a more relaxed quality of life, ambitious projects like Marseille’ media park project are laying the ground work for an entertainment boom in the south of France.

Of course, no amount of financial incentives can trump the necessity for experienced artists and quality production services. Among the studios canvassed for this report—from the multi-locale/multi-discipline heavyweights to the smaller IP-driven shops, whether in cutting edge CG or traditional hand-drawn 2D—the unifying qualities are apparent: Undeniable talent, remarkable technological ingenuity and a conspicuously Gallic cautious optimism looking toward the light at the end of the economic meltdown tunnel.

A testament to the artisanal spirit of animation is the amount of 2D work being produced in the country—much of it with a clear focus on originality of story as well as design. Neomis Animation, which was founded by Disney Paris veterans Bruno Gaumetou and Etienne Longa seven years ago, has worked on numerous features including Curious George, The Illusionist and Titeuf. Gaumetou and his team are now hard at work on their original Flash-animated series Cookie & Crime Club, created by Jeroen Dejonckheere, and a feature titled The Strange Case of Dad’s Missing Head—a blend of hand-drawn and digital 2D that was selected for this year’s Cartoon Movie. 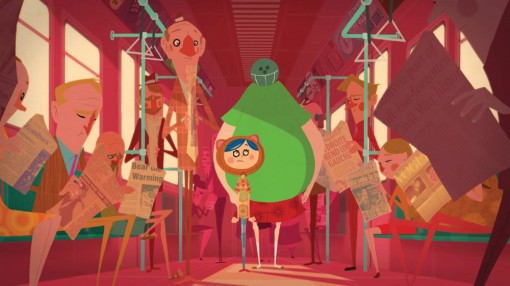 Je suis bien content, founded in 1996 by Franck Ekinci and Marc Jousset, is also primarily a 2D house, using Flash or After Effects with some CG elements to create its series Nina Patalo and the in-development Molesco—though Eckinci shares upcoming projects will push their CG skills. The studio splits its time between its TV and feature concepts, outside projects (commercials and features like Persepolis and the France/Canada/Luxembourg co-pro Le Jour Des Corneilles) and short films. 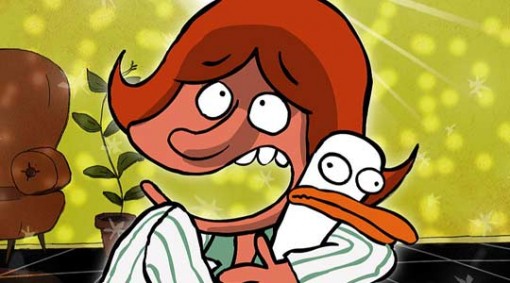 Advanced CG technologies are playing a large role in the industry as well. Pascal Hérold (of Herold & Family) founded his studio, Delacave, in 2007 with the express purpose of making CG-animated features. With his co-founder, exec producer Catherine Macresy, he has set up a state of the art 85-person shop where Delacave’s innovative “keymotion” technique (a blend of performance capture and key frame animation) is being used on Cinderella 3D—a 10 million euro production with Belgium’s Nexus Factory—and Baba Yaga. Both full stereoscopic efforts use Maya for characters and backgrounds, with Nuke and Fusion for compositing and an in-house hardware GPU rendering system that allows for real-time quality assessment at a lower cost. 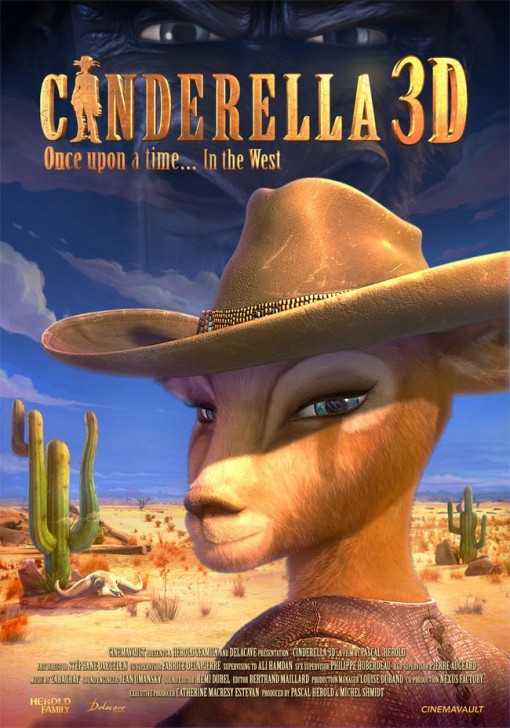 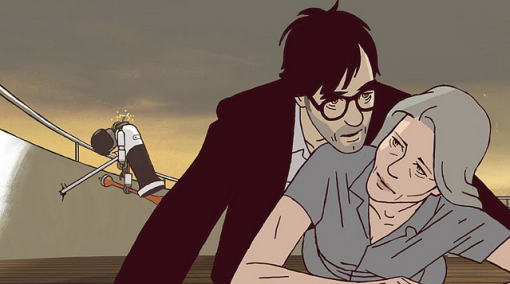 In Provence, Marseille’ Action Synthese is a dedicated CG studio producing popular kids’ features and series for the European market. Founded in 1998 by brothers Pascal and Laurent Rodon, the shop moved south from Paris in 2000 to gear up for The Magic Roundabout—Europe’s first CG feature. Now their heavily modified XSI-based series and film pipeline carries their work on popular shows Magic Roundabout and City of Friends (a Norwegian series taking advantage of TRIP). 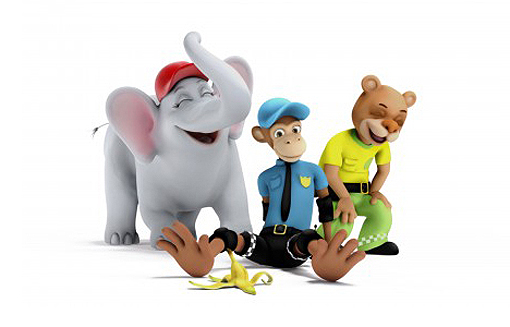 Pascal Rodon shares that Action Synthese is also working on a new series based on Rob Scotton’s Russell the Sheep books, The Wizard of Oz feature (directed by John Boorman) and a sequel to The Magic Roundabout. The studio puts a high priority on R&D to ensure the best possible quality on their tightly scheduled and budgeted productions, something Rodon says is common among French studios and aided by a TRIP provision. As animator Frederic Bonometti demonstrated for me, in-house software manages workflow and allows the artists and directors to selectively load scenes and tools to keep the render load light during production. A built-in quality control review option and personalized assignment tracker and message alerts add to efficiency. 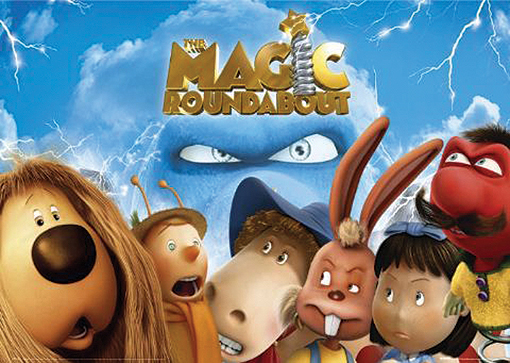 Taking the R&D trend to its logical conclusion is another Provence company, The Bakery. Founded in 2007 by DreamWorks vets Erwan Maigret and Arnaud Lamorlette, The Bakery ended up crafting an important tech tool called Relight while developing a 3D animated project. Seeing the value of their software, Maigret and Lamorlette decided to change gears and devote the studio to marketing Relight (which officially launched at NAB this year) to other growing animation houses. The interactive, all-in-one 3D lighting and rendering solution optimizes turn-around for high-end graphics by integrating an extensive suite of tools (including built-in compositing), offering immediate final image feedback, simplifying complex lighting tasks like matching CG to live action and allowing multiple users to access the same data or work in parallel, either from other sides of the room or other sides of the globe. 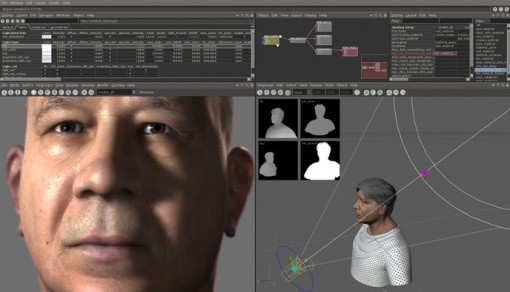 The Bakery’s main goal is to find small studios that will “grow with” their tool, instead of offering a set software plus loads of optional add-ons. “From our experience, bells and whistles are not what you want,” says CTO Lamorlette, whose tech and effects work on the Shrek  franchise earned him Academy recognition. “The goal is to create the best image for less money, and streamlining is key. I first concentrate on using customer feedback from different markets to customize solutions—Relight is a client-driven tool.” Relight is currently being used by shops like Cybergroup, Scrawl, NHK and for Mexican studio Locoloco Films’ CG feature Ana.

When speaking with French animation studio heads, the consensus on the benefits of producing in the country are delivered in almost word-for-word consensus. Repeatedly, praise is directed at the level of skill produced by local schools (like Gobelins and Supinfocom) and the experience of the animators—many of whom, like The Bakery founders, are artists returning to France from the U.S. and U.K. as Gaillard and Rodon both mention.

“A lot of the young animators go to America, because the jobs in France don’t match their skills. But they want to come back, and we need big projects to attract them,” notes Rodon. France’s focus on training stems from the country’s commitment to maintaining its artistic reputation, and Gaillard compares it to another source of French pride: “In making wine, there is a relationship between the growing region—the sun, the rain, the soil—and the taste,” he explains. “The same is true for animation.”

Because budgets tend to be lower, the French government has been very active in offering funding assistance and incentives to keep local productions competitive. The Centre National du Cinéma, France Television and regional governments provide funding, and the provisions of TRIP give France one of the top three most competitive tax incentive programs. International partners are integral to many projects, allowing several small studios to act as one while taking full advantage of the tax credit—Neomis has spearheaded an international digital 2D network called VEGA Studios with this in mind. For Delacave’s Hérold, the real value is not in being the cheapest work force, but in having the best balance of price and quality:

“In Europe, we can compete both monetarily and artistically … In France you can have great animation, great artists. And the low cost productions give work to young talent, instead of outsourcing.”

For The Bakery and Action Synthese, the southern region of Provence has added incentives for both start-ups and studios looking to relocate or establish a European hub. Having been spoiled by the California lifestyle during their DreamWorks years, Maigret and Lamorlette sought a location with a similar climate and attitude that would attract potential employees. Provence Promotion assisted the duo with establishing connections in the area and providing business development support.

“There’s a lot of space, the quality of life is better, and it’s beautiful for filming,” The Bakery’s CEO/COO Mairgret points out. “If you want to work in a nice area, but need to be close to the city—come to Marseille!”.

Action Synthese’s Rodon had similar reasons for relocating the studio from Paris to Marseille—just a three hour train ride south, but worlds apart—to break in to feature films. He says his studio was the first to come to the region, and not just to work on his tan.

“It’s hard work to make features!” he exclaims, “For creatives, it is important to have good quality of life. Marseille has sun, sea, countryside … Also because there was no industry but a lot of talent with no choice but to go to Paris, I was sure in the south we’d attract a lot of good people.”

The governments of Marseille and Provence are hoping to attract even more companies to the region by offering support and undertaking projects like the ambitious Belle de Mai project. Part of a massive urban renewal undertaking, Belle de Mai comprises 120,000 square meters of space dedicated to the entertainment industry with Heritage Center, Media Park and combined performance spaces, studios and galleries in La Friche.

Another ambitious media park project is underway in nearby Arles, the headquarters of acclaimed animation school Supinfocom. The Parc des Ateliers, springing from the razed and re-fitted remains of a 19th century train yard, will serve as a cultural mecca for the city, allocating space for photography, film, art, architecture and media ventures—a fitting heart for the ancient city known for its association with Vincent Van Gogh. Spearheaded by the LUMA Foundation, the Regional Council of Provence-Alpes-Côte d’Azure (PACA) and the City of Arles, the emblem of the project will be a tower designed by collaborating architect Frank Gehry which will hold work and studio space for artists. 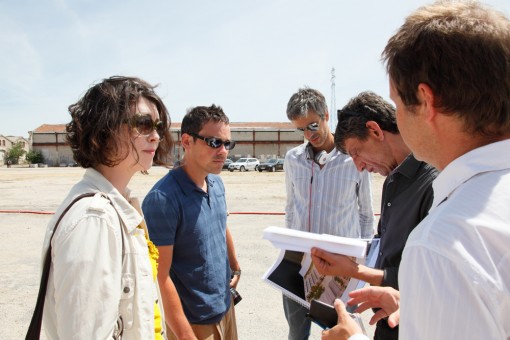 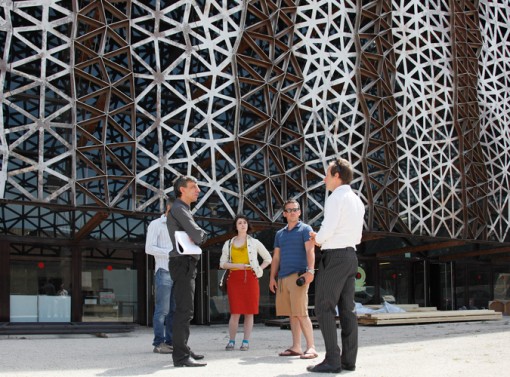 This summer, Supinfocom held its annual graduate showcase—an event well attended by studio recruiters from across Europe and North America eager to get a first glimpse at the latest crop of talent. Over 1,200 participants filled the ancient stands of Arles’ Roman ampitheater for the outdoor screening after the graduation ceremonies, presented in 3D. 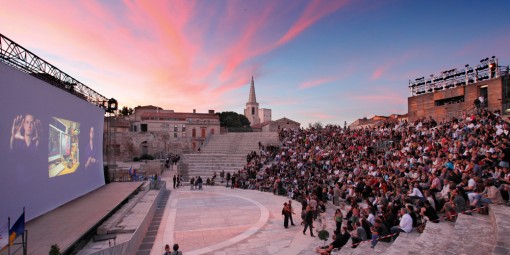 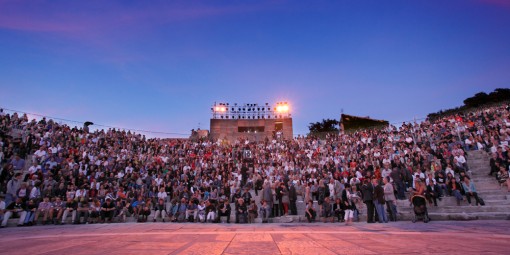 Stateside, those eager to learn more about the opportunities presented by producing in the country can check out the annual Animation Made in France event, an informational and networking event showcasing leading studios and unmasking the secrets of the TRIP program. Film France and the French Consulate in Los Angeles are co-hosting the event, set to take place October 27 at the Pacific Design Center.

Of course, some advice remains universal, as Pascal Hérold notes:

“I have no advice. For creation, you can’t give advice! A good story arrives like magic.”

But one is hard pressed to find a more magical place than this country of unbeatable artistry, devotion and je ne sais quoi.

For more information on these studios and production incentives, visit www.filmfrance.net or www.theprovencepartnership.com.