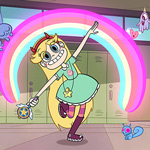 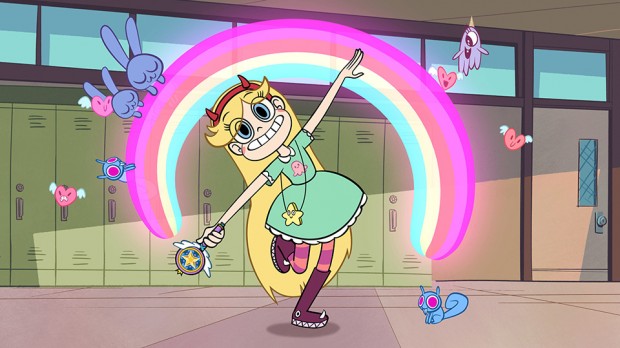 Disney TV Animation’s newest heroine is out to kick butt and make Earth a more magical place in Star vs. The Forces of Evil.

Growing up isn’t easy for your average adolescent. But tack on the duties of royalty, magical powers and being an exchange student in another dimension where, hello, an evil villain keeps sending his army of monsters after you, and it’s a recipe for disaster. Unless you’re the cartoon star of Disney Channel’s upcoming Star vs. The Forces of Evil. Then, it’s a recipe for awesome sauce.

The show follows 14-year-old Star Butterfly, an energetic princess from the planet Mewni who is sent by her Royal Parents to live with the Diaz family on earth to protect her powerful magic wand — which she still hasn’t quite figured out. Their responsible son Marco shows Star the ropes, and Star shows him how to come out of his shell — sometimes with too much enthusiasm. Not only must Star fend off a power-hungry villain with a Napoleon complex, she must also learn how to stay out of trouble to avoid being sent to intergalactic reform school.

Star is created and executive produced by CalArts grad Daron Nefcy, a Los Angeles native whose distinctively colorful cartoon-inspired art has been showcased throughout the area’s underground art scene since she was a teen herself. The first time series creator’s credits include Disney XD’s Wander Over Yonder, Warner Bros. Animation’s MAD and Nickelodeon’s Robot and Monster.

A Star Is Born

Nefcy pitched an early version of the concept to Disney about four years ago. Initially, Star was an offbeat grade schooler whose magic was all in her head. “She was more like a crazy kid who thought she was Sailor Moon,” Nefcy recalls. But right before her first meeting with SVP of Original Series Eric Coleman, she got her first taste of the joys TV toon production when one of the execs suggested making Star a teenager with real magical powers.

“I thought, how am I going to make this work? Eric comes in like, so, what is this about … I tried to pitch it like the same thing and it didn’t make sense. I left thinking I completely messed it up!” says Nefcy. But after an intense week of rewriting, she emerged triumphant. “I developed the idea that she’s a foreign exchange student from another dimension where she’s a princess, she has an all-powerful magic wand, evil villains are after her. A lot of this stuff was in the original version but it’s bigger now, richer. When I came back, they really liked it!”

Nefcy is stoked that contrary to the horror stories young creatives hear, she feels these changes and suggestions have truly made Star a stronger show. “When I came up with [the concept] in college, animation was different. I feel like you couldn’t do so much really big, imaginative stuff then.”

Creating an animated series has been Nefcy’s dream since fourth grade, and her lifelong passion for vibrant cartoons, “magical girl” anime like Sailor Moon and underground comics comes through in Star. While Earth may be in a comparatively drab dimension, the vivacious characters inhabit a super colorful world that from moment to moment can explode with extraordinary creatures and magical mayhem from Star’s wand.

One gets the impression that the sparkling 2D animation is what the ‘80s toons only dreamt they could be, but with wide-appeal humor in line with modern favorites like Adventure Time  and Gravity Falls. Nefcy gives much of the credit to the great team of designers and art directors Disney has put together in L.A. Their combined visions are expertly brought from board to frame by Canadian service studio Mercury Filmworks (Wander Over Yonder, Mickey Mouse) using Toon Boom’s Harmony.

While getting Star on screen is a lifelong dream come true, no one would say it isn’t hard work. The pilot phase alone took about a year, and producing the first 13-episode season another two. “The first season is so much just discovery and figuring out what the show is,” says Nefcy. “It’s definitely been really, really busy but I always feel like with these things you have to take it on like a marathon and not a sprint … You have to brace yourself, and take moments to have a life.”

Nefcy believes the filmmaking experience she got at CalArts was crucial in preparing her for the challenges of helming her own show. She points out that on a student film, an animator is forced to take on every aspect of production — not just the fun stuff. She also learned a lot from her gig on Wander Over Yonder, learning on the job alongside veteran creator Craig McCracken.

Since the show is meant to have a continuing arc (i.e., when someone accidentally gets turned into a troll, they better hope Star gets around to fixing them quickly), Nefcy admits one of the challenges has been to rein in all the awesomeness. “We’re always thinking about where to take the show next, and sometimes we need to pull back a little … We have a show where characters are at school and at home and going to other dimensions, and stuff she’s dealing with being a princess, and there’s evil forces — somehow it all seems to mesh together.”

Something that drew notice when the show was first announced is the fact that this is the first animated series for Disney TV created by a woman. But Nefcy considers herself to be just an edge on a rising trend, noting that the traditional animation “boys club” hasn’t been an issue during her career. She also points out that the Star team is mostly female, many of them recent graduates.

“The thing I’m most proud of in the show is Star’s character. She’s unique and funny and she’s a dork,” Nefcy says. “She feels like a real girl to me. But she’s not perfect. She makes mistakes, and can be kind of selfish, and I think that’s all great! I hope she’s a character people can relate to. Probably being a female show creator — how could it not help with that?”

Nefcy shares Star’s effusive optimism when it comes to the TV animation landscape in general. She’s excited to see that the networks are seeing the benefit of creator-driven content. “If anything, there’s just so much going on right now that as a person trying to run a show, it’s tough. You’re trying to get the best people, and so is everybody else!” Adventure Time, Rick and Morty, Wander Over Yonder and Gravity Falls are some of her current favorites, and, she laments, she hasn’t been watching as much anime as she used to.

Luckily, Star vs. The Forces of Evil seems to mix in all the things that Nefcy loves about graphic entertainment, and Disney is betting a lot of viewers will feel the same. “It’s really fun, really unique and we’ve worked really hard making it,” she says. “Hell, it’s got monsters and dimension portals and princesses — something for everyone!”

Star vs. The Forces of Evil premieres in March on Disney XD

A Wachowski Space Opera with Jupiter Ascending
An Open Mix