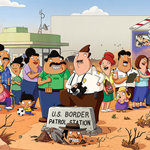 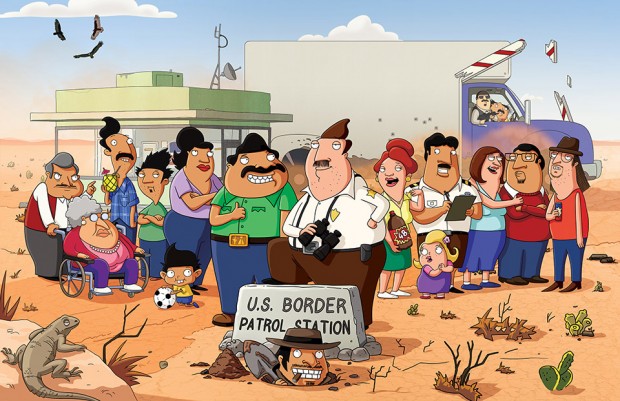 Fox’s new comedy Bordertown swings for the fences with the kind of hot-button humor only animation makes possible.

As a writer for Family Guy and for David Letterman, Mark Hentemann has been responsible for all kinds of laughs, from the wince-worthy to outright guffaws. With his new Fox show Bordertown, which centers on two neighboring families in the invented Southwestern locale of Mexifornia, Hentemann is going for the kind of comedy that sometimes only works in animation.

Hentemann’s main characters are: the Buckwalds, a Caucasian family with different attitudes toward their town’s growing immigrant population that fall along generational lines; and the Gonzalez family, that runs a successful landscaping business.

“There are some things, some lines, if you said them in a live-action show, it wouldn’t work,” says Hentemann, of the show’s very timely comedy. “But in animation, you can say things, go after subjects you might not want to handle if live actors were saying the lines.”

Hentemann first began developing the show almost ten years ago, while George W. Bush was president. At the time, immigration was a hot-button issue and one that often polarized voters and politicians. Then Barack Obama was elected, and the writer was sure that meant his idea for a show would be crushed because the issue would be resolved.

As we come to the end of President Obama’s second term, immigration is just as controversial as ever. It’s front and center in nearly all the political posturing that’s been done over the last few months by presidential hopefuls.

“When things are bad politically, it’s great for comedy, so the show went forward,” says Hentemann.

Hentemann himself is the grandson of German immigrants who came over in search of all the things the American PR machine promises, and found a way to make a life. After years of hearing his grandfather’s stories about leaving Germany, he found most immigrant stories touched on the same struggles. And some of the reactions to immigrants also seemed similar.

As he put Bordertown together, he knew he wanted a diverse writers room that could handle the subtleties involved in writing this kind of comedy, while also doing the kind of fearless topical shows he wanted to do. He knew he wanted to avoid taking a “politically correct” approach to the show and that he needed the experience of other writers who had a deep understanding of the immigration issues in the Southwest.

With that in mind, he recruited veteran writers like Valentina Garza who worked on The Simpsons, and Gustavo Arellano, who starred in Gringos at the Gate and wrote for The Colbert Report. Arellano is also known for his hilarious, controversial column in the OC Weekly, “Ask a Mexican.”

“There’s a kind of optimism in immigrant households, and there was for my grandfather, that you feel you’re working toward doing better here than maybe where you came from, especially if there was poverty or war,” says Hentemann. “So the Gonzalez family in our show has that quality and the older generation Buckwalds are struggling with this sense that they can’t just take for granted that they’ll do well.”

Hank Azaria voices Bud, the head of the Buckwald clan, who also happens to be a border-patrol agent. Nicholas Gonzalez is behind the voice of Ernesto Gonzalez, Bud’s Mexican neighbor who has been a resident of Mexifornia for the last 20 years. Gonzalez also voices Pablo Barracuda, the most notorious drug lord in the city, and J.C., who is the fiancée of Bud’s daughter as well as being the nephew of Ernesto. Judah Friedlander creates the vocal stylings of Sandford Buckwald, Bud’s rebellious twentysomething son. Alex Borstein is Janice Buckwald, Bud’s wife and mom to Becky, Sanford and Gert. Missi Pyle appears as Gert Buckwald, the 5-year-old Buckwald daughter who is a beauty pageant contestant. Carlos Alazragui is El Coyote, a Mexican trickster who dabbles in border crossings and teases Bud during the openings of the show. And Seth MacFarlane, the executive producer of the show, also voices Peter Griffin.

There are oodles of characters on this show, which features a kind of animated ensemble cast and operates with what appears to be a single-camera for animation look. Hentemann did the initial drawings and sketches of the characters and then the animators at Bento Box came in and did the final looks of them.

Speaking Truth To Power – With Animation

Storylines of the show are decidedly on point when in comes to tackling current issues that involve the border, race, stereotypes and changing demographics. The second episode of the series finds Bud using drug money that was confiscated in order build the kind of fabled border wall we’ve all been hearing about this election season.

Of course, Bud has a reckoning when the same wall he built to try to keep his job safe ends up crashing the local economy and nearly ends his job. It’s no time before he himself becomes a smuggler and guides illegal immigrants under the wall to make a point that his job as a border patrol officer is still very much needed.

The third episode even aims at religion, as the leader of the huge church presses Bud to recruit his wealthy neighbor Ernesto because the church is very interested in squeezing more money out of the city’s growing Mexican population. The church is a type of Crystal Cathedral and initially impresses Ernesto, though he soon sees through their ploys.

“I think we decided early on that we didn’t want to censor ourselves, that we wanted to be as funny and as truthful as we could in every show,” says Hentemann. “There was really no other way to do it because if you go into this show afraid, you’ll end up making a show that doesn’t work, that isn’t relevant and worst of all isn’t funny.”