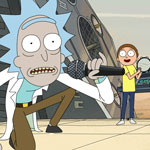 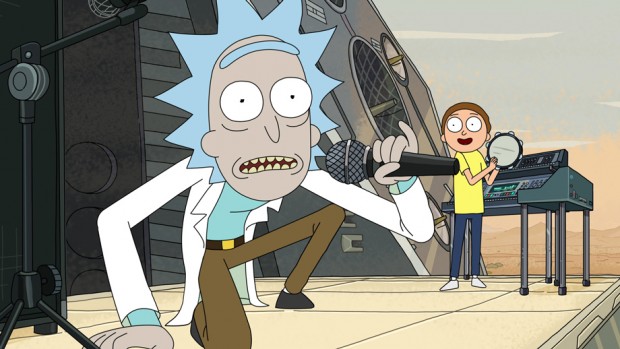 Adult Swim’s hit series Rick and Morty fights its way back for a second season full of more insanity and maybe a few less burps.

Very little and an awful lot will have changed when Rick and Morty returns July 26 for its second season on Adult Swim. Unchanged are the crazed dimension-hoping adventures undertaken by the gruff, angry and constantly belching scientific genius Rick and his perpetually terrified grandson assistant Morty.

But coming back for a second season after a wildly successful first run was far from easy for the show’s creators, Justin Roiland and Dan Harmon, who hit more than their fair share of creative obstacles — including some off-the-cuff comments relating to the show’s animators organizing under The Animation Guild — in getting the second season to air.

The show ramped up expectations for the second series by contributing a two-minute couch gag for The Simpsons’ 26th season finale on May 17 in which the duo crashes a spaceship into the couch — killing the entire family. Luckily, Rick has a plan: Sending Morty off with a sample of “Simpsons goo” to an alien world so they family can be reconstituted.

Roiland says the project began when he and Harmon invited The Simpsons crew to do a guest commentary for the home-video release of Rick and Morty season one.

“So Matt Groening, Al Jean, and a handful of the writers were there and they did a commentary track on the DVD, and during that commentary track they offered us a couch gag,” says Roiland. “I immediately asked my line producer — Mike Mendel, who worked on the first five seasons of The Simpsons as their line producer — to reach out and see if it was a sincere offer, and it was.”

The final segment ran a full 45 seconds longer than the two-minute finished version. “I really cut it down to as fast and as tight as I could,” says Roiland. “Ultimately, we sent them the animatic at around two minutes and second seconds and Al was totally fine with it, so we just made sure to keep it around the two-minute mark.”

Harmon, a television veteran, says every successful show has to deal with the so-called “sophomore slump.”

“There’s always this kind of unavoidable — at least in my experience, having done two big experiments in this areas — sophomore chaos that comes with (the idea that) now we’re writing a show that we’ve seen on TV,” says Harmon, who also created and is executive producer on the cult live-action comedy series Community. “Now we have real characters, there’s a canon we’ve established, there’s stuff we’ve done that we want to do again, there’s stuff we’ve done that we don’t want to do again.”

That makes the second season “roughly twice as hard to write than the first,” he says. “But also in my experience, then the third season gets to be OK. We can compare these two experiences and the third season goes back to being effortless because now you’re armed with this road of trials you’ve been down, all this knowledge and you realize what’s fun and what’s not and stuff.”

Harmon says the lesson he tries to teach others but always has trouble following himself is to avoid being too ambitious and thinking too much about a desired result instead of going with the flow.

There were more late nights in the writers’ room for season two, but Roiland says the season eventually did click into place.

“It’s just thinking, ‘Oh, we’re going to do this amazing thing,’ as opposed to, ‘We’re going to have fun,’” says Harmon. ‘That’s something that doesn’t happen when you’re making the first season of a television show because every episode is a discovery, and then with a second season there’s a big temptation there, if you’re not careful, to go, ‘OK, now that we know everything about the show, we’re going to get really interesting about it.’ All’s well that ends well, but I think the process was harder on my end due to my tendency to accidentally overcomplicate.”

Like the first season, the second will feature mostly stand-alone episodes with only a light bit of serialization coming in toward the end.

“We’ll see if that’s good or bad,” says Harmon, adding that it’s probably better not to ask fans to store unresolved plot points in their brains during the show’s hiatus. “It might better for them to go I can’t wait for the show to come back because it was really funny and amazing.”

Little changed in the animation process for the second season, though there were challenges like the season premiere episode, in which the screen keeps splitting with the timelines to offer dozens of just slightly variations on a single moment.

“It’s almost pointlessly complicated from an animation perspective because they’re not even doing interestingly different things, they’re just doing different things,” says Harmon. “They’re just putting down cups of coffee differently in each panel, so I can imagine that somewhere in the world there’s 50 or 60 animators what would like our heads on a plate for that one.”

Roiland says one of the shots was so complicated it required 14 hours to render.

“Fourteen hours the computer was completely off rendering and you couldn’t use it to do anything; it just had to sit there and render,” he says. “It was insane.”

The show is animated using Toon Boom Harmony, with elements mostly created in Los Angeles — from character designs to storyboards and animatics — and then executed by Bardel Entertainment in Vancouver.

“They basically build the show with all those pieces,” says Roiland. “Then the show comes back to us as Harmony files that we are able to open up and make adjustments for the final push.”

So far, the system has worked well. “There’s the occasional section of the show that feels a little puppety or feels a little digital,” Roiland says. “We try our best to fix that stuff and plus it, but for the most part it all works really well and looks good and it affords us the ability to make little adjustments as we lead up to the final lock.”

While the main characters’ designs are unchanged — save a slight adjustment to the size of Jerry’s head — sharp-eyed viewers will notice a lot more detail in the background characters and the environments.

“This season is insane, because we tasked our design team with having to create entire planets of characters, entire species,” says Roiland. “I mean it’s just insane the amount of builds per episode. It’s very, very ambitious from that perspective.”

Roiland also does the voices for both Morty and Rick, who has one of the more distinctive voices in animation — gruff, annoying and constantly belching. The latter has become the character’s trademark, though Roiland says he’s not really that good at those bits. “I’ll go through the script and I’ll circle certain lines of dialog and then I’ll come back when I’m done with all the regular takes and I’ll just grab a real crappy low-calorie beer and some water and I’ll do a run of burp takes.”

Fans of Rick’s burps may notice they’re slightly less prevalent in season two, Roiland says. “That wasn’t a decision that was made or anything, it was just me in the record and I get to the burp takes and in some episodes and I’m like, I’ll do these later,” he says’ “And then I just would forget to do them or whatever, but that’s how that’s done.”

Not surprisingly, the show’s scientific elements have little basis in reality. “It’s whatever science we’ve learned through science fiction, basically,” says Harmon. “Everyone in the writers’ room is a big fan of the sci-fi and fantasy we’ve all been raised on, so we really don’t research a darn thing — and it shows!”

But that hasn’t stopped the show from attracting a more diverse and adult audience than the typical Adult Swim series.

“People in the science field are actually, ironically, really enthralled with our show,” says Harmon. “I think some of them became scientists because a part of them fantasizes about being like Rick, being so important that you can just tell people to go to hell.”

The show also counts among its fans Nic Pizzolatto, creator of the hit drama series True Detective. “He loves the show and he emails me just to encourage me and stuff,” says Harmon. “Obviously, he’s a legitimate writer, so I keep that Post-It note on my laptop.”

That element of Rick — the character who constantly acts like a jerk but is nonetheless right most of the time — is a hard act to pull off on a series, though it seems easier with animation than live-action, Harmon says. “It’s sort of like the way the Hulk or Thor taps into this part of you that just wants to smash stuff,” he says. “Rick taps into that part of you that just wants to be selfish for a day and not apologize for being smarter than everyone in the room.” u