Radical worlds are set to collide in a new time-traveling episode of Nickelodeon’s CG Teenage Mutant Ninja Turtles set to air Sunday, March 27 at 11 a.m. ET/PT. The half-hour episode, “Trans-Dimensional Turtles,” guest stars the voice cast of the 1980s Turtles cartoon Cam Clarke, Rob Paulsen, Barry Gordon and Townsend Coleman as the modern day Turtles are transported to another dimension and meet their ’80s alternate-reality counterparts. Actor Pat Fraley is also reuniting with the classic toon cast to reprise his role as Krang.

In “Trans-Dimensional Turtles,” all eight Turtles must join forces to battle the ’80s Krang and Kraang Sub-Prime. After meeting their retro counterparts in a 2D animation world, the entire crew returns to the CG animation dimension, giving their “new” friends a taste of their 3D realm. In another dimensional twist, the episode will offer a glimpse of the Turtles in a comic-book world resembling the Mirage Studios comic series by Kevin Eastman that started it all.

Starting March 21, fans can click over to Nick.com to play a new game set in the ’80s Turtles’ world: Teenage Mutant Ninja Turtles: Kickin’ It Old School. Players will travel through the city streets and across the rooftops charging through Foot Ninjas to diffuse all the “dimensionizers” planted by Krang and save the city.

Season four of the contemporary Turtles follows the half-shell heroes on an epic journey through outer space. Allied with a cyborg known as the Fugitoid (voiced by David Tennant), the Turtles hurtle through space, meet bizarre alien creatures and combat galactic monsters in a race against time to save planet Earth. 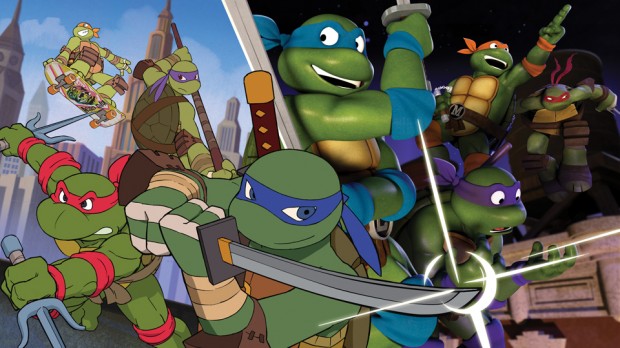