We are just ferociously delighted to share with our readers that Nickelodeon’s spankin’ new, original animated series Bunsen Is a Beast will debut on Tuesday, February 21 at 5:30 p.m. ET/PT! Created and executive produced by Butch Hartman (The Fairly OddParents, Danny Phantom, T.U.F.F. Puppy), the monstrous misadventures will air at 5:30 through Feb. 24, and continue to premiere new episodes Saturdays at 10:30 a.m.

Bunsen Is a Beast is produced by Nickelodeon Animation Studio in Burbank, which officially opened the doors on its newly expanded building — a 200k-plus square-foot, state-of-the-art, sustainable complex — on January 11.

The colorful 2D series follows Bunsen and Mikey, two new friends who seek out fun and adventure in their town of Muckledunk. As the first beast to ever attend a human middle school, Bunsen feels the pressure to succeed and prove to the world that monsters can live among humans (without eating them). With Mikey’s help, Bunsen learns how to do human tasks like complete homework, eat ice cream and ride the bus. And Mikey learns to navigate the Beast World, meeting all kinds of weird and wonderful creatures who live there.

In the premiere episode, “Bearly Acceptable Behavior,” Amanda tries to get Bunsen kicked out of school when he brings a dangerous bear to class. Then, in “Beast Busters,” Bunsen and Mikey have to save Amanda from mischievous Sneeze Beasts that escape from Bunsen’s nose.

Viewers can visit nick.com, the Nick App and the network’s Facebook and Instagram feeds to learn more about Bunsen Is a Beast. A sneak peek will air Feb. 20 at 7:30 p.m., and a full-length episode is available now on nick.com, Nick On Demand and the Nick App. 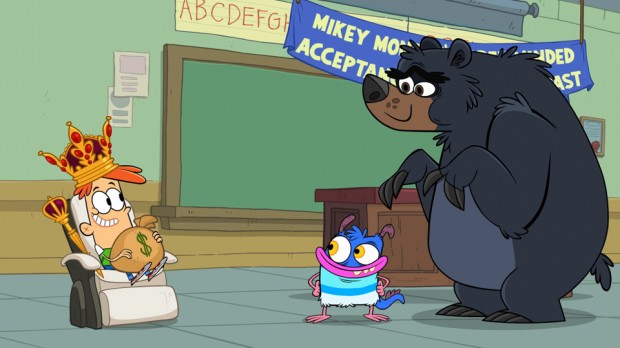 Bunsen is a Beast!