Overall, Nick announced that it has nearly 700 new episodes across every genre. These projects are powered by key insights culled from the network’s recent, nationally representative study “The Story of Me,” which reveals that today’s kids are America’s most diverse generation, most likely to grow up to become entrepreneurs, and closer to their parents than previous generations.

“Today’s kids are coming of age in a revolutionary period of change, in tech, entertainment, politics and culture, and these factors have definitely influenced how they see the world,” said Cyma Zarghami, President, Nickelodeon Group. “It’s our job to understand everything we can about kids, and connect our audience to relevant content and characters that speak to their need for authenticity and diversity– both on our screens and beyond through on-the- ground experiences.”

A couple animated highlights of this robust slate are The Adventures of Kid Danger and Captain Man, inspired by the live-action Henry Danger (TV’s No. 1 kids’ series); and Rise of the Teenage Mutant Ninja Turtles, a reimagining of the classic amphibian franchise.

Fans will also get to see new areas of the superheroes’ headquarters thanks to the magic of animation, including the Man Cave’s tube-based hero-delivery system, garage full of vehicles and gadgets; and meet all new friends and foes.

“We are giving the characters that kids love, the opportunity to play in fresh new ways,” said Zarghami. “Animating Dan Schneider’s incredible Henry Danger, while keeping the voices of the current series, signals to the audience that we are working hard to serve them on all platforms.”

Rise will send Leonardo, Raphael, Donatello and Michelangelo on all-new adventures as they seek to unlock the mystical secrets of New York City. From the tallest skyscraper to the dankest sewer drain, the Turtles will encounter absurd new mutants and battle bizarre creatures — while enjoying a tasty slice of pizza. Tapping into mystic, ninja powers they never knew existed, the turtle brothers must learn to work together and navigate the perils of the modern age and hidden realms in order to fulfill their destiny to become a team of heroes.

“The Turtles is a property that has reinvention in its DNA, which keeps it fresh and relevant to every new generation while satisfying the demand from its adult fans,” said Zarghami. “Turtles has been an incredibly important franchise for us since we reignited it five years ago, and we’re excited for the new series to take the characters in a different direction with more humor, a younger and lighter feel and all-new dimensions to explore.” 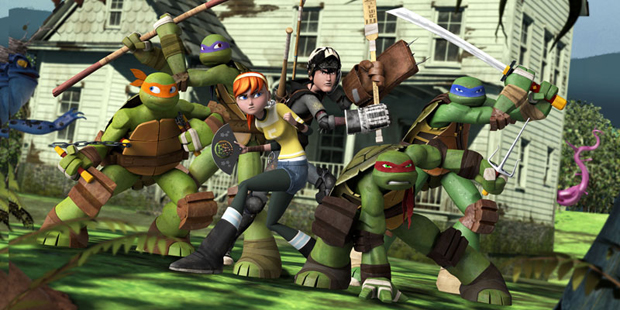