Nickelodeon is packing the pre-Halloween season with spooky tricks and delightful toon treats, including brand new themed episodes of SpongeBob SquarePants, Teenage Mutant Ninja Turtles, Peter Rabbit, Sanjay and Craig, Fairly OddParents and PAW Patrol (and a bunch of live-action fare as well, but this is Animation Magazine after all). Kids and fans can also pop onto www.nick.com/shows/halloween for more creepy content. Here is the toon-centric lineup for your TV schedule planning pleasure:

The Fairly OddParents “Scary GodCouple”
Saturday, Oct. 19, at 9:30a.m.
During this 30-minute special, Foop becomes Vicky’s anti-fairy godparent, Vicky and Foop terrorize Timmy and the kids of Dimmsdale and Foop tells Vicky that the reason Timmy has thwarted her all these years is because he has fairy godparents. If they can destroy the fairies, no one will be able to stop them.

Sanjay and Craig “Blackout / Family Re-Noodman”
Saturday, Oct. 19, at 10:30a.m.
When the lights go out, Sanjay becomes the most powerful kid in town during “Blackout.” During “Family Re-Noodman,” the boys infiltrate Noodman’s reunion in hopes of tasting special Frycade wings.

Teenage Mutant Ninja Turtles “Invasion of the Squirrelanoids”
Saturday, Oct. 19, at 11:00a.m.
While tracking mutagen, the Turtles bring a mutated squirrel back to the lair. When it starts multiplying, the Turtles must hunt the squirrel mutants and prevent them escaping into the city.

Monsters vs. Aliens “Curse of the Man-Beast / It Came From Level Z”
Saturday, Oct. 19, at 12:00p.m.
After hacking into Monger’s top secret files, the monsters learn that there was supposed to be another member of the team, The Man-Beast, during “Curse of the Man-Beast.” Next in, “It Came From Level Z,” the boys of Team Monster have turned the Rec Room into a pigsty. When Monger demands they clean up, the guys enlist the help of an old zombie.

PAW Patrol “Pups and the Ghost Pirate”
Wednesday, Oct. 23, at 12:00p.m.
It’s Halloween and the pups are dressed in costume and going Trick or Treating, then to a party! Capt’n Turbot has decorated an old wreck as a pirate ship and the whole town is invited to the party. When the ship mysteriously starts to head out to sea captained by a “ghost” Ryder and the PAW Patrol must save the ship and discover who the ghost is. 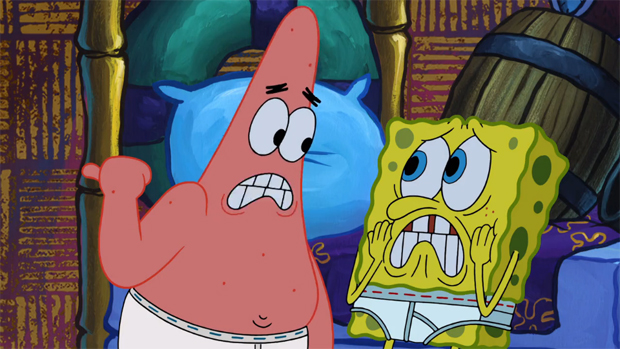