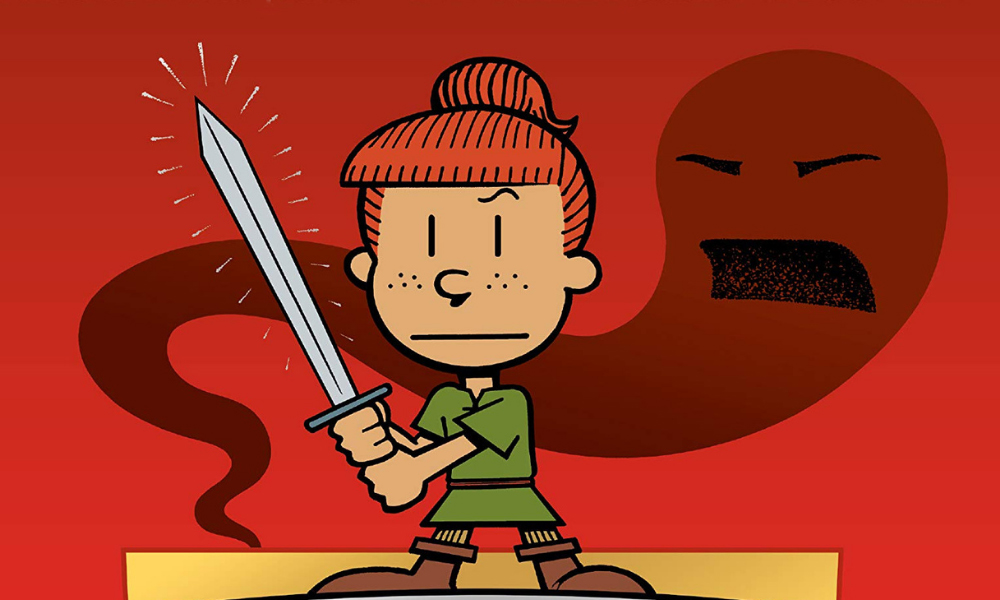 Max & the Midknights (Battle of the Bodkins cover; Crown Books for Young Readers)

The adventures of a young girl dreaming of knighthood and the hijinks of three unlikely best friends will soon unfold on Nickelodeon with the pickup of two all-new animated series. Nickelodeon has greenlit Max & the Midknights, based on the bestselling children’s book series written and drawn by acclaimed author and cartoonist Lincoln Peirce (Big Nate), and Rock, Paper, Scissors, the first short picked up for series from Nickelodeon’s Intergalactic Shorts Program.

“These two series packed with relatable characters, hilarious escapades and rich, imaginative worlds are the perfect additions to our Nickelodeon content family,” said Naito. “Translating the mega-popular Max & the Midknights from a book to television series is a creative undertaking that we can’t wait to dive into, and the comedic adventures of friends Rock, Paper and Scissors is truly made for our Nickelodeon audience.”

Max & the Midknights (20 episodes) follows a determined 10-year-old girl named Max, who pursues her dream of becoming a knight by leading her friends on an epic adventure in the fantastical medieval kingdom of Byjovia. The greenlight marks Nickelodeon’s second series based off the beloved works from Peirce and follows Big Nate, which is set to debut next year.

As a small girl with big ideas in the Middle Ages, Max will defy the status quo, fight for justice, and inspire everyone she meets with her feisty and fearless leadership. Not only will Max and the Midknights battle sword-wielding zombies, duel a malevolent sorceress, and tame a fire-breathing dragon, they’ll also have loads of fun, forge lasting bonds of friendship, and push each other to be braver and bolder versions of themselves.  Clever, kind, and seriously sassy, Max is always ready to lend a hand — or a sword — whenever anyone needs help.

“I am absolutely delighted to join forces with my friends at Nickelodeon to bring Max & the Midknights to life,” said Peirce. “Nickelodeon’s passion for unforgettable stories and iconic characters is unparalleled, and there’s no partner I’d rather work with.  I couldn’t be happier.”

Peirce’s comedic-adventure book series has spent multiple weeks on the New York Times Best-Seller list, is published in 14 languages around the globe and available as ebooks and audiobooks. The books are published by Crown Books for Young Readers, an imprint of Random House Children’s Books.

Rock, Paper, Scissors (20 episodes) brings the iconic childhood game to life! This character-driven comedy follows the hilarious shenanigans of roommates Rock, Paper, and Scissors on their hijinks and ridiculous adventures. Rock, the moral compass of the group, is always struggling at his dream of becoming a model; Paper is an inventor and the brains of the group (if by “brains” you mean “making stuff that’s always blowing up”); and Scissors is the wannabe cool guy whose ego brings an endless fountain of chaos to these three friends. No matter how much they compete and mess with each other, at the end of the day, they will always bond over their shared love of one thing: wacky nonsense.

Rock, Paper, Scissors was picked up from Nick’s Intergalactic Shorts Program. The initiative launched in June 2019 and is overseen by Naito, with Vernon serving as the program’s executive producer and Paul Watling (Spider-Man: Into the Spider-Verse) as co-executive producer. Kim and Wineman oversee development and production of the program, which is designed to identify and develop original comedy-driven content for kids from creative voices and passionate storytellers.