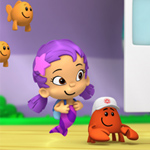 The show’s stars, five diverse preschoolers with guppy tails, live and learn in an aquarium like environment, exploring their world and the things their landlubber viewers would—dinosaurs, dentists, colors, cowboys—in innovative ways.

“We wanted to create a world that we hadn’t done before,” says Scull, “We got excited about the underwater world of the mermaid episode of Backyardigans and we thought it looked really great. We dabbled, thought about doing a whole universe underwater…we realized there hadn’t been a preschool show about that.” 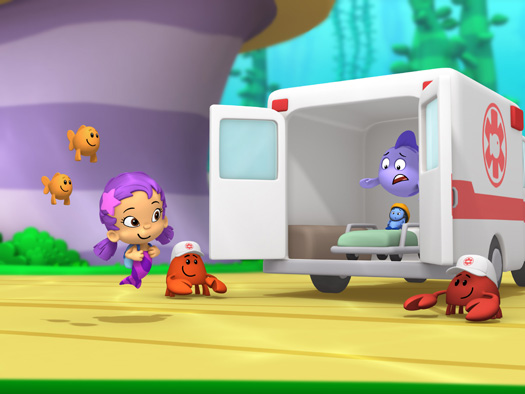 And their experience in CG animation made the idea even more tantalizing, according to Belt. “Because it’s 3D, we were really excited about going deep into the watery world and not just moving left to right in a traditional 2D sense,” he explains, “We could sort of explore and go to any level because we can swim. If you’re underwater, you can basically fly, and we were really interested in exploring some of that camera stuff in a preschool environment, and also having interactive stuff that felt more immersive.”

The creators wanted to utilize interactivity without making it—key word—pedantic. By putting the Guppies out in their world in addition to their classroom setting, the show is able to inspire the audience to participate instead of hammering in facts. “We made sure [their teacher] Mr. Grouper doesn’t just sit in front of the class and recite a bunch of information we’re expecting the audience to retain,” Belt elaborates, “We want to play it and sing it and experience it!”

A big shiny chunk of this evolved take on interactivity comes from the show’s catchy pop-inspired songs and dances (which are choreographed by children’s dance program coordinator Beth Bogush and performed by real dancers whose movements are recreated in animation) which tie in a lesson with physicality. Songs teach information and help transition the characters throughout the show’s setting and activity changes. 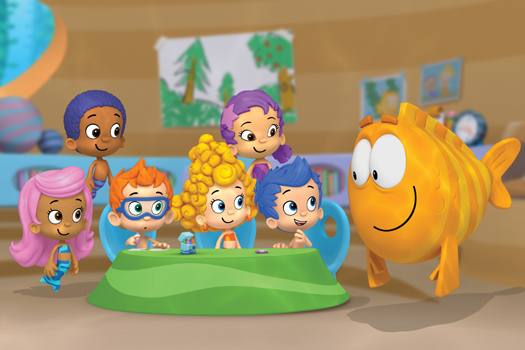 Tying all these educational elements together is the show’s admirable CG animation—a world and characters crafted out of bubblegum colors, round organic shapes and a touchable matte texture. The inspiration for the Guppies’ world came from an unlikely place: those whimsical, collectible Japanese rubber erasers.

“We think they’re so cool,” Scull enthuses, “The way they hold the light; they have this soft, squeezable feel. The whole world is made to reflect that. Whether it’s a sandwich or the kids’ skin or the kelp, everything has this soft, matte finish which looks like the same material. That locks in the feel of the world.”

The creators worked with their animation team at W!LDBRAIN Entertainment to develop this unique look and work out the other key visual elements of the Guppies’ world.

“After Backyardigans, which is photorealism all the way through, we wanted to change to something more fantastical,” he explains. Another way this was accomplished was by using 3D lights to recreate the caustic reflections of light through the surface of water throughout the show.  Belt adds that the unbelievable setting lends itself well to the Guppies’ experiences with above-water elements like snow, pigeons or skyscrapers—free from the limitations of an underwater theme. 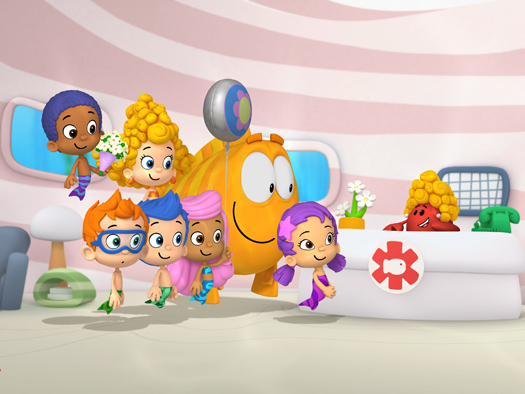 The creators, who both have a deep admiration for Pixar films (“I studied early Eastern European experimental animation, though, so that doesn’t help,” Belt laughs) and animation in general, developed their own system for crafting Bubble Guppies—which takes a crew of roughly 100 about 10 weeks to create each of the 20 episodes.

“I come from 2D,” Scull begins, “In 2D you don’t have a lot of control over what a characters looks like. In a 3D world you do, but not necessarily the best camera angles. We developed a system where it’s almost a limited 3D animation—it doesn’t sound as good as it is!” The Guppies are assigned 15 key poses, which speeds up the storyboarding process and produces very consistent, crisp animation, ensuring the characters’ always show their best side.

It’s clear the creative duo bring stons of enthusiasm, artistry and toon know-how to the table. But above all, Belt and Scull have a deep respect for their pintsized fans. “We’ve heard in the past, ‘Why try so hard? They’re only three years old, they can’t tell the difference.’ We totally disagree,” Belt insists. “You make it alive. That’s what it takes,” adds Scull. “To make it beautiful and believable, even for a preschooler, you make it alive in a very real way.”