Nickelodeon, which has a 30 year tradition of bringing groundbreaking toons to TV, has announced its programming slate for 2014-15 — which will include new animated series, re-ups of viewer favorites and the acclaimed Animated Shorts Program. Check out some of the highlights coming to TV and digital:

Bad Seeds (26 episodes) centers on Harvey, a sweet and well-meaning bird, who befriends Fee and Foo — the wildest imps in the forest. Their improbable connection grows as they push each other out of the comfort zones and into endless adventure. Created, written and directed by C.H. Greenblatt (Chowder)

Pig Goat Banana Cricket (26 eps.) features a series of absurd, interwoven stories about four friends and roommates: Pig (the fool), Goat (the artist), Banana (the wise-guy) and Cricket (the brain). The show is created by Dave Cooper (also art director) and J. Ryan, who co-writes with executive producer David Sacks (The Simpsons, Regular Show). The pilot was directed by indie animator Nick Cross.

Welcome to the Wayne (6 eps.) will be launching on the Emmy Award-winning Nick App. The animated comedy follows the adventure of two 10-year-old boys — Olly Timbers and Ansi Molina — as they explore their crazy apartment building, the Wayne. The series is created and written by Billy Lopez (The Wonder Pets!)

For its third year, Nickelodeon’s global Animated Shorts Program has selected 10 domestic and seven international projects from over 1,000 submitted pitches, which will be developed into shorts that will air on Nickelodeon and be featured on nick.com and on the Nick App this year. Domestic projects include The Loud House by Chris Savino, Bear Wrestler by Deanna Rooney, By Request Pizza by Arica Tuesday & Mick Ignis, Hole by Sam Spina, Matt and Gus by Matt Braunger, Charlie and Mr. Two by Travis Braun, Bug Salad by Carl Faruolo, Earmouse and Bottle by Brian Morante, Woodstump by Zach Smith and Broats by Jack Cusumano. 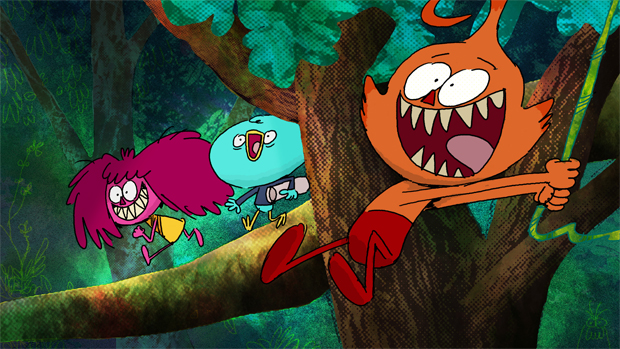