A mild-mannered bird and his two wild best friends embark on a series of hilarious adventures in Nickelodeon’s new animated series Harvey Beaks, which will premiere Sunday,March 29 at 7 p.m. ET/PT. Viewers can catch a special first-look at the show, produced by Nickelodeon Animation Studios in Burbank, on March 28 at 9:30 p.m. immediately after the 2015 Kids’ Choice Awards. The series will roll out on Nick channels around the world beginning this summer.

Created by Chowder mastermind C.H. Greenblatt, the 26-episode Harvey Beaks is set in a magical forest where one sweet, play-by-the-rules young bird named Harvey is on a mission to experience wild adventures with the help of his reckless best friends Fee and Foo. In the special first look, “Pe-Choo!”, Harvey must do the one thing he’s never managed before: get into really big trouble! This adventure will encore following the series launch episode the next day, “The Spitting Tree” — in which our heroes spit from the highest tree in the forest. 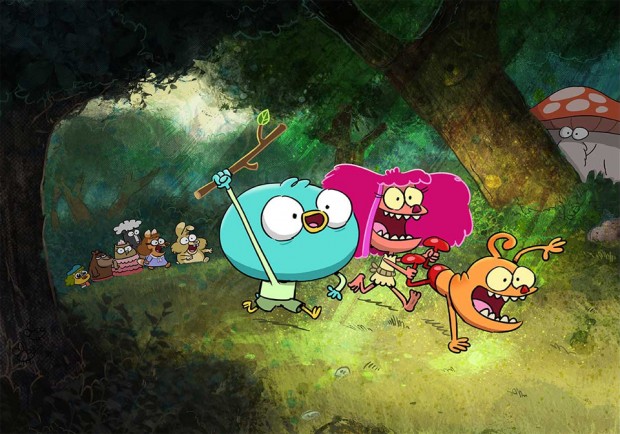