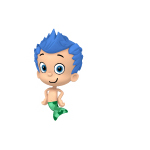 The new animated preschool series Bubble Guppies is ready for kids to dive into, premiering Jan. 24 at 11 a.m. ET/PT on Nickelodeon.

The CG-animated series follows a group of underwater preschoolers who go on adventures discovering their world with catchy pop songs and educational content.

The series is created by executive producers Jonny Belt and Robert Scull, who also wrote the premiere episode, ” Call a Clambulance.”

The cast of characters includes:

Here’s a look at a couple of music videos from the show:

Nickelodeon will feature a two-minute sneak peek and music videos of Bubble Guppies on Nick Jr. Video, the broadband video service available on Nickjr.com. Bubble Guppies episodes will be promoted and simulcast on Nick mobile and available on iTunes.